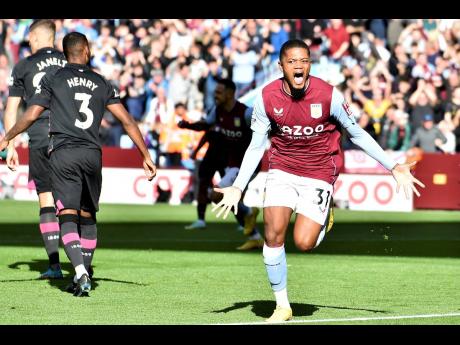 Aston Villa forward Leon Bailey, who has been red hot since the start of the English Premier League (EPL) season, could be on the move in January.

According to reports, Chelsea are considering a move for the Jamaican to boost their attack.

Bailey has scored three goals and provided two assists in 14 games this season, already doubling his output from last season.

The Sun newspaper noted that Bailey has a close friendship with Jamaican-born England winger Raheem Sterling, and Chelsea hope the pair can combine to strengthen their offence.

Chelsea's struggles in attack last season spilt over into this season. After the sacking of coach Thomas Tuchel earlier in the campaign, their form is rapidly slumping under recently appointed manager Graham Potter.

According to the reports, the London-based Chelsea are looking at a range of attacking options and believe Bailey will improve their attacking prowess in January.

It is also understood that the United States of America's attacker, Christian Pulisic, has become a surplus at Chelsea, and they are looking to offload the winger to make room for Bailey.

The 25-year-old Bailey has long been reported to be on Chelsea's radar even while at Koninklijke Racing Club (KRC) Genk in Belgium and Bayer 04 Leverkusen in Germany.

His improvement this season has got the Chelsea hierarchy interested in signing him, and according to the Mail newspaper, the Blues will be making a move for him in the next transfer window.