Neymar gets treatment at hotel as Brazil beat Switzerland 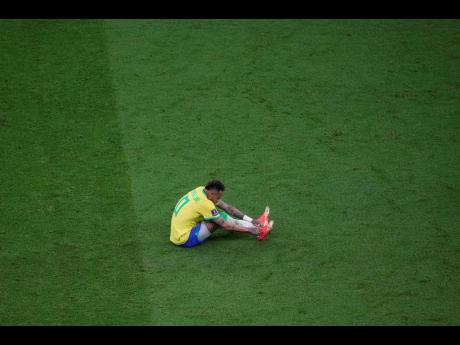 Brazil’s Neymar, lies on the pitch during their World Cup Group G football against Serbia, at the the Lusail Stadium in Lusail, Qatar on Thursday. Brazil won 2-0.

Neymar stayed at the team hotel for physiotherapy treatment on his right ankle yesterday while Brazil defeated Switzerland 1-0 to advance to the round of 16 at the World Cup.

The Brazil forward was the only player who did not go to Stadium 974 for the team's second match in Qatar. Danilo, who also missed the game because of an ankle injury, accompanied the rest of the squad to the stadium.

Neymar posted an Instagram story showing him watching the match on television while undergoing treatment on his foot.

Brazil coach Tite used midfielder Fred as Neymar's replacement against Switzerland, while Eder Militao came in for Danilo in the right-back position.

Neymar damaged ankle ligaments in Brazil's opening 2-0 win over Serbia on Thursday. He said he will play again at the World Cup, but team doctors have not yet given a timetable for his recovery.

The right ankle also kept Neymar from playing in the 2019 Copa America in Brazil. Five years earlier, he was taken out of the World Cup in Brazil after hurting his back in the quarterfinals against Colombia.

Neymar, trying to win his first major title with Brazil, is making his third World Cup appearance. He is two goals shy of Pele's record of 77 with the national team.

Brazil's last group match is against Cameroon on Friday.