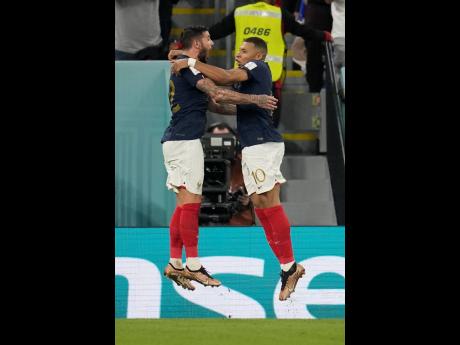 France’s Kylian Mbappe (right) celebrates with teammate Theo Hernandez after scoring their first goal during the World Cup Group D match against Denmark, at the Stadium 974 in Doha, Qatar, on Saturday. France won the match 2-1.

Theo Hernandez wants to win the World Cup for France and his big brother.

Lucas Hernandez was in tears when he ruptured the ACL in his right knee early in France's 4-1 win against Australia last week. His brother Theo replaced him at left back in a straight swap, even though they are different styles of players.

"His injury was very bad news for us. It's not easy for him, either, because it's also a really long injury," said the 25-year-old Theo, who is one year younger than his brother. "I've been talking with him on the phone every day since he left Qatar. I want to play in every match here because I want to bring the trophy back for him."

The younger Hernandez, who plays for Italian champion AC Milan, is more attack-minded than his brother and sometimes seems more like a winger than a defender.

At his news conference on Sunday, a Chinese journalist told him his nickname among Chinese fans is "Supercar" because of his incredible speed.

"I prefer Ferrari," he joked, smiling.

So it's a dream for him to play on the left side of the French attack with Adrien Rabiot in midfield and Kylian Mbappe up front.

When he set up Mbappe for France's winning goal in the 2-1 win against Denmark last Saturday they jumped into each other's arms.

"We combine really well together and it's a real pleasure," Hernandez said. "When you have Kylian in front of you then things become easy. We get on really well on the field."

It brings a sharp focus to his play, too.

"I try not to miss with any of my passes," he said.