Chase’s half-century not enough for WI 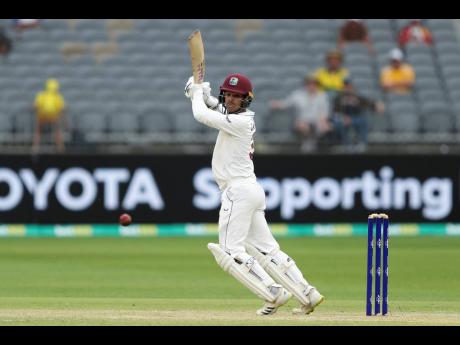 West Indies’ Kragg Brathwaite bats during play on the second day of the first cricket Test against Australia in Perth, Australia on Thursday. Australia won the match by 164 runs.

Roston Chase's first Test 50 in two years proved insufficient as a first-session collapse all but condemned West Indies to a heavy 164-run defeat to Australia in the opening Test yesterday.

Resuming the final day on 192 for three in pursuit of an improbable 498, but with survival the main objective, West Indies lost two wickets inside the first hour and another two before lunch, before being dismissed for 333 about 35 minutes before tea at Perth Stadium.

Much of West Indies' hopes rested on captain Kraigg Brathwaite, but he added only nine to his overnight 101 before becoming one of off-spinner Nathan Lyon's six wickets for 128.

Chase, entering at No 8, then carried the fight for the West Indies with 55, his 10th Test fifty, in a precious 82-run, eighth-wicket partnership with Alzarri Joseph who entertained with a bold 43.

Once the stand was broken, however, West Indies lost their last three wickets for 18 runs, to slump to their 14th defeat to Australia in their last 18 Tests and extend their abysmal 19-year run without a win against the hosts.

"Obviously disappointed with the loss. We gave away the wickets in the first innings, but it was a good fight as a team and as a bowling unit," Brathwaite said afterwards.

"It's good to see the fight from the batters, but still a lot of improvement to be done."

He added, "There was consideration to go for runs if we had wickets, but losing wickets put us under pressure."

West Indies' start was less than ideal. Left-hander Kyle Mayers, yet to score overnight, spanked two attractive off-side boundaries in scoring 10 before edging Lyon low to Steve Smith at first slip in the morning's sixth over.

Brathwaite followed five overs later after facing 188 deliveries in nearly 51/4 hours and striking 13 fours, misjudging the length, playing back to Lyon, and having his stumps rattled.

"I was pretty happy with that one," said Lyon. "Kraiggy batted extremely well. He's a superstar batsman and I had to be patient."