Alpha says thanks for Express support 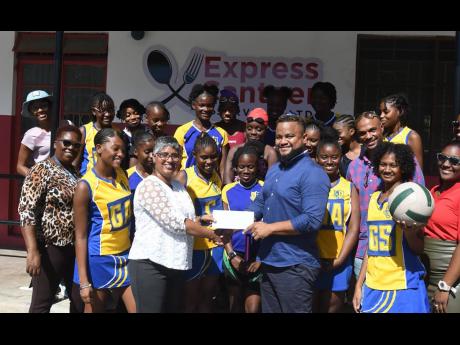 CEO of Express Canteen Ryan Foster (front right) presents the cheque of $250,000 to Principal of Convent of Mercy Academy, Alpha High, Kali McMorris, in the presence of teachers, coaches and athletes from a broad cross section of sports at the institution on Tuesday.

The Convent of Mercy Academy, Alpha High School, has expressed appreciation to Express Canteen Services for sponsorship of its sports programme.

Express' sporting support for the traditional all-girls institution was formalised during a $250,000 cheque handover ceremony on Tuesday by the company's CEO, Ryan Foster, to Principal Kali McMorris, in the presence of teachers, coaches and athletes from a broad cross section of sports to include netball, swimming and track and field.

Noting the long-lasting benefits of sport, McMorris reasoned about the invaluable nature of Express' contribution.

She said: "I think most importantly, when we get funding like this it offers the opportunity for all sports, who have students who are really eager and come together, even without some of the formal trappings of a team, to participate. And I think participation in sports is a lifelong activity that we want to inculcate in all our students for health, for wellness and of course for any prospects that you can have academic advancement.

"The relationship with Express Canteen, that partnership that Mr Foster has entered into with us, has already borne fruit and we are happy," the principal added.

The school's history of involvement in team sports was also revisited, with McMorris noting that they have been particularly strong in netball, and continue to do well in track and field, as a small team. She also shared a growing admiration for the girls, given their efforts during the past three years.

"These young ladies, our fifth formers in particular and this track team that we currently have are particularly dear to me because I think they're resilient, independent and determined.

"Throughout the COVID-19 pandemic, despite all the challenges of training and financing when the school would've wanted not to continue with a programme for safety, for finances, these young ladies came together with their parents and their coaches and they demonstrated to the principal that they could have a team," said McMorris.

"And they train and they found ways to overcome all the financial challenges and as a result of it we were able to draw together as a community to make that team at least go to Champs."

That show of commitment has not escaped Foster either.

"I have been very impressed, not only with the humility and dedication of the school's administration but how the girls have performed," he said.

Foster, who is also the CEO/Secretary General of the island's apex sporting body, the Jamaica Olympic Association (JOA), stated: "The Convent of Mercy Academy, Alpha, has long been a well-established educational institution that has contributed significantly to the Jamaican landscape. As their food partner, we also believe in providing students with a balanced education where students not only excel in the classroom but the field of play.

"Express Canteen is proud to make this donation towards the Alpha sports programme and hopes that this contribution will encourage the performance of the girls in their respective sporting discipline," he added.

Sprinter Amoi Kentish, who has been on the track team since first form through to fifth, competes in the 100 metres hurdles, 100 metres, 200 metres and 4x100 metres.

Commenting on Express Canteen's support, she said: "I can say on behalf of my team we are very grateful because since we've restarted our track season we've been to one track meet, three basically, and not most of our team members have track gear. So we wear our Alpha tops and tights, but we still try our best to get our girls out to compete, to support the school and to go out there and do our best.