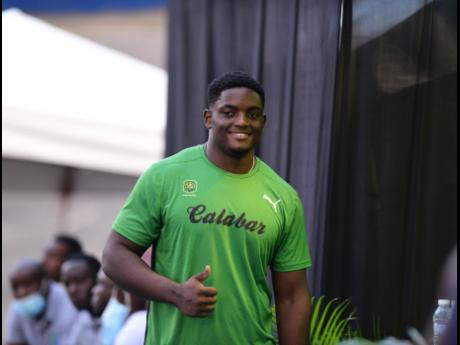 Hosts Calabar and Hydel High, both coached by Corey Bennett, were in great form at Saturday's McKenley/Wint Track and Field Classics at Calabar High School as they won the majority of the events.

World Under-20 shot put silver medallist Kobe Lawrence provided the home fans with a lot to cheer about as he continued his build-up to the ISSA/GraceKennedy Boys and Girls' Championships, with two impressive wins in the Class I discus and shot put.

As he did at PureWater/Jamaica College/R Danny Williams Meet a few weeks before, Lawrence made it back-to-back double as he first captured the shot put with a heave of 19.86 metres, before winning the discus with a throw of 58.19 metres.

Jamaica College's (JC) Racquil Broderick and Josh-Ty Brown had to settle for second and third in both events. In the discus, Broderick had a mark of 56.59 metres and Brown 48.94, while in the shot put it was 17.81 and 17.16 metres, respectively.

The hosts picked up a big win in the Class II boys 100 metres, as Shaquane Gordon took the top spot in 10.48 seconds with a wind reading of 2.6 metres per second. His teammate Khamani Gordon was second in 10.50 seconds as JC's Dontae Watson took third in 10.60.

In Class I, JC swept the top three places as Christopher Scott won in 10.57 seconds ahead of teammates Hector Benjamin in 10.64 and Dwight Downer with 10.66.

Christopher Ellis won the Class III boys 400 metres in 52.26 seconds for the hosts with Rasheed Grant of St Mary High taking second in 52.33 and Ellis' teammate Alejandro Palmer getting third in 52.54.

Making their first appearance of the season, Hydel girls showed no rust with good all-round performances, led by double successes in the field, through Natassia Burrell and Sharika Christie. Burrell won Class II shot put and discus with 16.16 metres and 38.39 metres, respectively, while she ended second in the javelin with 29.05 metres as teammate Christie won with 32.72. Christie also won the Class II long jump with 5.43 metres.

On the track, Jodyann Daley also had double wins, in a negative wind reading of 2.2 metres per second, won the Class II girls' 100 metres hurdles in 14.11 seconds, ahead of teammate Camoy Binger, who is formerly of St Jago and did 14.60.

Daley's other win was in the 400 metres as she clocked 55.75 seconds, as teammate Abigail Campbell, who is formerly of Ferncourt High, was second in 55.77.

World Under-20 girls 200 metres bronze medallist Alana Reid was in good form for Hydel in the Class I girls 100 metres as she stopped the clock at 11.40 seconds to win, ahead of teammate Oneika McAnnnuf in 11.60.

Wolmer's Girls' School finished first and second in Class III as Natrece East won in 12.32 seconds, ahead of Kaysian Sewell who did 12.36.