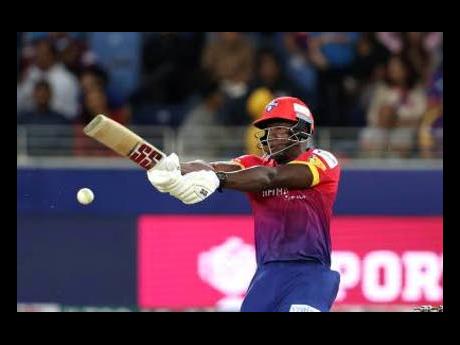 The in-form Powell, widely tipped to be West Indies' next white-ball captain, holed out off the final ball of the innings for a Man-of-the-Match 97 to heartbreakingly miss out on his second Twenty20 hundred, as his Capitals piled up an imposing 222 for three off their 20 overs at Zayed Cricket Stadium.

Former England Test captain Joe Root belted a sparkling 82 from 54 balls, combining with Powell in a stellar 119-run, second-wicket stand which laid the basis for the eventual total.

In reply, Pollard lifted Emirates with a robust 86 from 38 deliveries after the run chase lay in ruins at 26 for three at the end of the sixth over, when another ex-West Indies white-ball skipper Nicholas Pooran played on to seamer Hazrat Luqman, who took two wickets for 24 runs, without scoring.

Pollard put on 118 for the fourth wicket with former West Indies teammate Andre Fletcher, who made 35 not out from 34 balls, but by the time the Trinidadian perished in the deep at the end of the 16th over, Emirates still required 79 runs from 24 balls.

Najibullah Zadran arrived to smash a nine-ball 30, with a four and four sixes, in a 39-run, fifth-wicket stand with Fletcher, but the 36 runs needed from the last over proved a hill too high to climb.

The victory was Capitals' second in five matches and moved them into fourth spot in the International League T20 standings, while the result was Emirates' first defeat, keeping them third on six points after four outings.

Asked to bat first, Capitals were handed an exhilarating start by Root, who counted eight fours and three sixes as he posted 78 off 53 deliveries with Robin Uthappa, who made 26.

When Uthappa skied to deep backward square in the ninth over, Powell entered to keep the momentum going, lashing four fours and 10 sixes and speeding to his half-century off 22 balls with a six over mid-wicket off seamer Muhammad Waseem.

A hundred appeared there for the taking, but Powell picked out deep cover off Pollard's medium pace.

Hazrat's double strike then put Capitals in control of the game before Pollard assumed responsibility of the run chase, slamming eight fours and half-dozen sixes.50

Pollard reached his off 27 balls in the 14th over and then accelerated, belting three successive sixes off left-arm seamer Fred Klaassen in the next over, and another 17 runs in the 16th, before falling.

Najibullah single-handedly took a stunning 29 from the 18th over sent down by Sri Lankan seamer Chamika Karunaratne, before Klaassen bowled him in the penultimate over, which cost just five runs and changed the game.