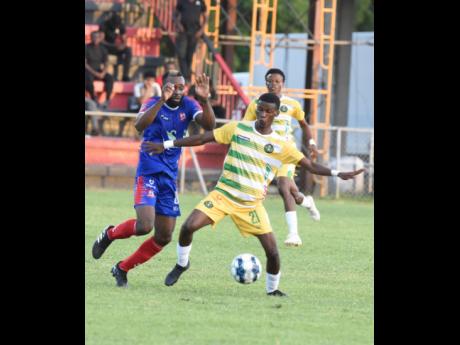 Arnett Gardens were left frustrated as they were held to a 0-0 draw by second-from-bottom Faulkland in the Jamaica Premier League's Monday Night Football fixture at Anthony Spaulding Sports Complex last night.

Faulkland had to wait for 11 games to make their Monday Night Football debut and despite their position in the table, the Montego Bay-based Faulkland not only battled hard but were close to stealing three points themselves.

Head coach Leacrofft Lettman believes the key to their performance was a better understanding of what it meant to play together.

"Off the field plays a big role in play on the field. We learnt the whole social impact that was breaking down in the team and we got them in the frame of mind to play together as a team and it paid dividends," Lettman said.

Faulkland had a chance to win the game in second-half stoppage time but was foiled by Arnett Gardens goalkeeper Eric Edwards.

While the result kept them in the relegation places, they are no longer at the bottom in the points standing as Chapelton Maroons' six-point deduction after their forfeiture of the Mount Pleasant game on Sunday, placed Faulkland above them.

Lettman said that the game was their opportunity to show the true spirit of the team.

"The guys were pumped for this and waiting for an opportunity like this for their families back home to see them on TV. It brought out a lot in them because they fought for the whole city of Montego Bay and their families," Lettman said.

Meanwhile, Arnett Gardens assistant coach, Eric Rademakers, was upset that they missed chances in the first half, which included Ajuma Johnson putting the ball over the bar from close range with the goal at his mercy.

"I don't think it was underestimating (Faulkland). Some sharpness in front of goal would have changed this game if we had it in the first half," Rademakers said. "As the game advanced to the 90 minutes you saw players getting a little more impatient and chose to go for the long ball a little quicker."

Faulkland are in 13th place with three points while Arnett move to 18 points.