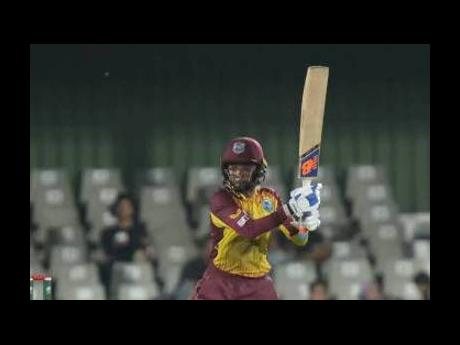 Shemaine Campbelle plays through the off side during her 47 against India.

West Indies Women buckled under the pressure of unbeaten half-centuries from Smriti Mandhana and Harmanpreet Kaur to crash to a 56-run defeat in their second game of the Twenty20 International Tri-Series here yesterday.

Player-of-the-Match Mandhana struck 74 from 51 deliveries and Kaur, 56 off 35 balls - the pair featuring in a 115-run, unbroken third-wicket stand - as India Women marched to 167 for two off their 20 overs at Buffalo Park.

In reply, West Indies Women were limited to 111 for four from their 20 overs, Shemaine Campbelle punching a top score of 47 from 57 deliveries and captain Hayley Matthews hitting an unbeaten 34 from 29 balls.

Veteran off-spinner Deepti Sharma claimed two for 29 to lead India Women's attack and hand them their second win in as many matches, following their opening success over South Africa Women.

"India got away with scoring (and) our fielding was a big miss. Hayley couldn't open as she was dealing with an injury, so she had to bat lower down, and in order for us to win she has to bat as early as possible," said assistant head coach Robert Samuels.

"We have to put bigger scores on the board, not just batting out the 20 overs. Our focus is to get the batting consistent and to do the basic stuff better, which will bring more confidence.

"Hayley is getting into some form, Shemaine has had scores in the warm-up and now this match, so little by little we are trying to get things going by the time we get to the World Cup."

Choosing to bat first, India Women were carried by Mandhana's enterprise, the silky left-hander carving out 10 fours and a six, first in a 33-run first-wicket stand with Yastika Bhatia, who made 18 and then in her century stand with Kaur, who counted eight fours.

West Indies Women stumbled early on in their run chase, Deepti knocking over openers Britney Cooper for nought and Rashada Williams for eight, before left-arm spinner Rajeshwari Gayakwad trapped Shabika Gajnabi for three, leaving the innings tottering on 25 for three in the seventh over.

Matthews, entering at No 5, desperately tried to revive their fortunes, partnering with Campbelle in a 71-run fourth-wicket stand, but both lacked the aggression required to move the run rate forward.

While Campbelle struck five fours and a six, Matthews counted five fours and by the time Campbelle clipped a low full toss from left-arm spinner Radha Yadav for Amanjot Kaur to take a brilliant diving catch in the deep, West Indies Women still required an impractical 72 from 15 deliveries.

Afy Fletcher, who finished on 10 not out, struck a couple of boundaries in the penultimate over but the game was long gone.