Parents wants me to break up with my man 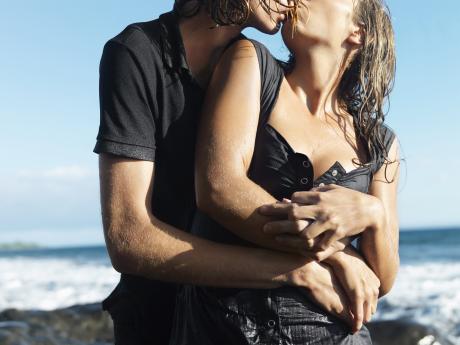 This is the first time I am writing to you. I have a boyfriend but my parents want to break us up. He is much older than I and has five children with one woman. They are not married. She cheated on him while he was on away. He said he cannot forgive her because she was not in need. He sent her money every time he got payed. He heard she was cheating. The man's brother sent messages to him telling him about it but he did not believe. When he returned hand questioned his older children, they told him that the man slept at the house sometimes. He went to a lady who can 'see things' and she confirmed that it was true. She told him that before he left Jamaica, his children's mother had tied him to her. She said it would have cost a lot of money to untie him. He gave her the money and now he is free. However, my family are Christians and do not believe in such things. They don't want me to have anything to do with him. They are afraid. They are encouraging him to stay with his children's mother and forgive her. I do not have children. I am working and can take care of myself. It is hard for me because nobody in my family likes him.

I believe that you should listen to your relatives. I don't believe that they hate this man. They are concerned about you and your future and perhaps believe that you can do better. This man has five children and they were living together.

He went on farm work, but while he was away she cheated. It would be difficult for him to forgive her. She is a very wicked woman. She was not in financial need. This man took care of his children. His children's mother should not have cheated.

Perhaps one may say that she was very lonely while he was away and she needed to satisfy her sexual appetite, but she would not have died. You are a single girl, you don't have children. Have you considered that if you were to marry this man, he would not be in a position to help you much financially?

I know that you say you are working but whatever he earns, most of it will probably go to his children to support them. Remember, he has five kids! You would have to carry most of the financial load in your new home, so consider the matter carefully before you make a decision.