I’m going to break up this wedding 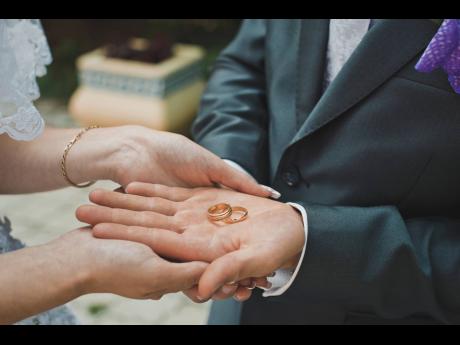 I am 31 years old and I have been living with a man for seven years. We have two children together. This man and I are planning our wedding. We went to a jewellery store and paid down some money on the rings. We told relatives that we are planning to get married and they are helping us. All of a sudden, my intended has changed his plans because he met a woman who was staying in Runaway Bay and they became friends. She promised him that she can help him, but they would have to get married.

He didn't tell me anything about it. One of his co-workers told me about their plans. He used to leave his phone anywhere in the house, but lately, he has started to turn off his phone. If he is near to me, and the phone rings, he always says to the person, "Can't talk to you now".

His co-worker told me when the girl is coming back to Jamaica to marry him. He also told me that he is going to be a witness at the wedding. I have been faithful to this man. I treat him well. Everybody tells him how well he looks.

I let him know that I know what is going on and it would be "death before dishonour."

I know exactly where the marriage is going to take place and I plan to go there to 'mash it up'. I can't allow him to marry this girl and leave me stranded. Look how long I have been waiting on this man to marry me! I turned down other men because of him.

These days, when I cook and he comes home from work, he is not eating. I called one of his sisters and told her that I heard that he is planning to marry an American woman. She said she doesn't believe that, but she would talk to him about it. When I called her back, she said that he didn't deny it and all he is looking for is an opportunity.

I can't come to terms that this man is going to leave me and marry someone else. I am going to break up this wedding!

If this man is planning to get married to someone else, allow him to do so because if he had any respect for you at all, and if the love that he had for you was strong, no one could get him to marry another woman regardless what opportunity he might see.

I believe that when he took you to the jewellery store, he meant well. I don't believe he was trying to fool you. I believe that up to that time, he intended to marry you. But his mind changed when he met this American woman and she promised to marry him. He probably saw a brighter future with her. People change all the time.

Now, I don't want you to get yourself into trouble. You say that you know the date of the wedding and where it would take place. Don't go there on that date. He is rejecting you for another woman. He may regret it in years to come. But leave him alone.

If the rings are already paid for and you have them, keep them. Perhaps the jeweller would take them back and give you cash. You need the money more than this man. Your children will grow up and remember what he has done to you. They may even hold that against him. I repeat, don't get yourself into any trouble. Stay away from the wedding.

You say that this man is not eating what you cook anymore. Maybe because of the threats that you made, he is afraid that you may poison him. But you know that is not in your mind at all. Let me ask you this question: After his wedding, where is he planning to stay? With you? I am just curious to know what kind of plans he has made or is making. Let me hear from you again.