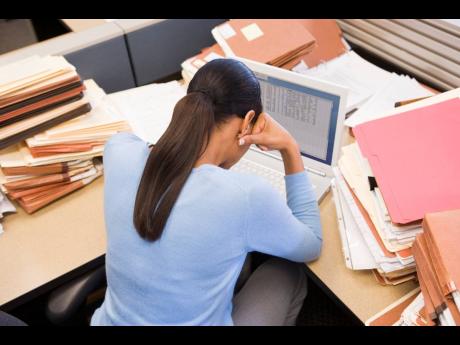 I am a regular reader of your column. I am 23 years old and I have two children. My mother does not like me. She is the reason why I have ended up with two children. I did not know why she hated me until my children's father and I broke up after eight years of our relationship. It is a long story, but I will try and cut it short.

This guy and I were dating from I was 16 years old. Everything was going well. I became pregnant when I was 17 years old, and by the time I was 18 years old, I had the baby. One of my sisters was also pregnant at the time. She was only 15 years old. About five months after I had the baby, my babyfather and I got into a fight over nonsense. My mother was present and instead of her helping, she called a crowd and told the people that my boyfriend was beating me.

PUT OUT OF THE HOUSE

Rumour spread around that my babyfather was also the father of my sister's child. I believed it at first, but he denied it. My sister is a 'road runner'. My mother put me out of her house from I was 15 years old because I got into a fight with my sister. So, from age 15, I was living with this man. He schooled me and provided everything I needed, but the relationship was abusive.

When my child was three years old, I got involved with a man he did not know. After the years of bad living and abuse, he found out about the man. He left me but later admitted to getting my sister pregnant. He suggested that I should do a DNA test to prove that it was his child. I told him that it didn't matter to me because he couldn't hurt me anymore or cause me to hate my sister because I didn't have any feelings for him anymore. And whatever he did for me, I was grateful. I had nobody to talk to all these years because everything I told my mom, she told other people and she told him.

One time I made up my mind to leave this man and I ran away to stay in another parish. And would you believe that the man showed up there with my mother? She told him that I was at a family house in another parish. Right now, I am still involved with the other man, but he is living with his babymother. I am not looking for a serious relationship with him. I want to go back to church and give my life to God because it is more than once this man almost killed me. And it is not many Jamaican women who have left a relationship alive.

I need your advice. I would also like you to help me to get a job although I am far away from you. May God bless you and continue to do your work.

You say that your mother has caused you to have two children because it was she who caused y ou to leave home and go to live with this man who fathered two children with you and also fathered another child with your sister. It is very sad that your mother did not give you the type of guidance that would have helped you to make the right decisions.

When things went wrong, she told the neighbourhood. Unfortunately, some mothers are like that, but they fail to realise that they are not only shaming their daughters, but they are also disgracing themselves because intelligent people know that if the children had a better upbringing, so to speak, they probably wouldn't have gone astray.

I am not just sorry for you, but also for your younger sister, who yielded to this man and became pregnant by him. He gave you everything you needed, but he abused you. However, you are not making life easy for yourself because you have got involved with another man. And this man is living with his child's mother. If you are not careful, he will use you and he may even get you pregnant.

PEOPLE ARE NOT ALWAYS WRONG

You say the relationship with your children's father has ended. Your sister, who has a child for him, has that relationship ended? It is not every time that people in a district are wrong in what they say about men and women. People knew from the very start that this man had got your sister pregnant. Your mother should have done something about it. She could have reported him to the police, but she didn't care.

I wish to God that your sister would go back to school. Encourage her to talk to the people at HEART and perhaps you should do so, too. You need a job, you say, but what are you qualified to do? I can assure you of my prayers, and I will also pray that the Good Lord will provide for you. I know it is tough on women who do not have any education or skill to support themselves, so guys take advantage of them.

You say you are going back to church, do so, and ask the members of the church to help you find a job, and please let me hear from you again.