In love with my best friend 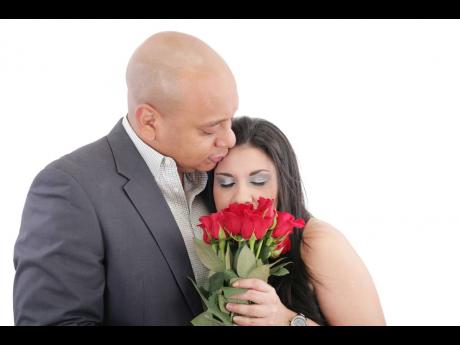 I think I have fallen in love with my best friend. We knew each other for about seven years now - since we were going to the same high school.

After leaving high school we would keep in contact, and even when I went on the road I would call him and he would walk with me and follow me home. I would go to his house sometimes and we would chill out and talk. He would comfort me when I was stressed and encourage me to do better.

He has a girlfriend and sometimes he says some things to me that makes me wonder if he wants us to have sex. We have become so close that we share almost everything with each other.

We would normally meet on Fridays after work with some other schoolmates, and sometimes his girlfriend and us would eat and talk for some time.

I broke up with my boyfriend, and one day while my best friend and I were talking, he mentioned about us having sex and I was surprised.

He said he wanted to have sex with me for a long time but he didn't say anything because I was in a relationship.

We also talked about what might happen if we had sex. We knew it could cause the friendship to end or for one person to fall in love, etc.

We become closer every day and when I was going through the break-up, he was the one I could call at any time and talk to. He would invite me to functions he was going. His family knows me well.

Sometimes I would not see him for two or three weeks and I would miss him, even though we talked on the phone almost every day.

I DIDn't WANT TO BREAK FRIENDSHIP

I was getting to like him and wanted to have sex with him, but I did not say anything to him about it because I didn't want to mess up our friendship.

One Saturday, we were to go in town to buy something and go someplace to hang out. I went to his home to wait on him until my friend got a break from work so she could join us. While we were at his house, he told me that he wanted to have sex with me but I said no, even though I wanted to.

Another day we went to the beach and while we in the water, he said he wanted to have sex with me. I wanted to, but again I said no.

While we were on our way home I really wanted to, but I waited until I reached home to tell him that I want to have sex with him. He said that another time we would.

Another time when he got break from work we met on the road, but I was going to work and he was going home, so he told me that I should go somewhere with him in the evening, and I agreed. We went to a guest house and had sex.

We went a couple of times after. But I realised now that I am thinking about him in a different way. Whenever I don't hear from him, I miss him and I want to call him sometimes, but I don't want him to know that I am falling in love with him.

I want to stop having sex with him because I don't want to end up broken-hearted but, at the same time, I want more of him.

What should I do? Please advise me.

He played around and he gave you a long rope to hang yourself. Now he has you fully covered.

He behaved as a gentleman by accompanying you home, etc. That's what men do; they play the game until they have you where they want you. Now you find it difficult to resist him. You want sex more than him. And if you continue to hang around, he will let you have it.

Evidently, he cannot take you to where he lives because the folks there know that he has a girlfriend. And although the girlfriend and he might have their problems they are still together. So he takes you to these so-called 'hotels' to spend time with him.

You have become a regular client there and that is very sad because you are such a nice girl. But you have thrown your good morals away.

I want you to come back to your senses. People make mistakes, and some mistakes can affect one dearly. So tell this man that both of you have to stop this nonsense. End the relationship. Look around, you will find another man, but don't be in a hurry.