My babyfather is a deadbeat dad 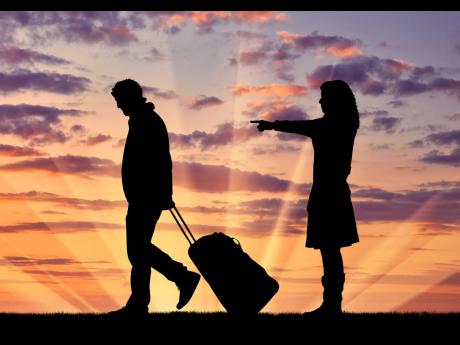 I was listening to you recently and heard you addressing the topic of people who don't keep promises. I have lots of experiences like that with my own relatives.

They borrow from me and do not pay me back. I am the youngest of five children. My brothers are always trying to get money out of me, and when I refuse to give them, they curse me.

I have an older sister. All she is good for is to dress up, and every week, she has a different man and a different hairdo.

I have a child, and the father refuses to accept him as his child, so I have been supporting this child on my own. I love my son. I will not take my son's father to court.

When the child was born and my father saw my son's father on the road, he asked him why he wouldn't even buy Pampers for his son. He told my father that I was to go and find the father of my child because he knew that I was sleeping around. Can you imagine this man telling my father that I slept around?

He was the second man that I had sex with. They say self-praise is no recommendation, but I am speaking the truth.

My boyfriend does not want me to take this man to court either. He says that would embarrass him. My boyfriend has one child, and I have one.

We do not have any problems supporting our children now that both of us are working. I do not even want to see my child's father.

I don't know how I got mixed up with him. I blame myself because I was young and he was much older than I when I got pregnant.

Whenever anybody asks my son what is the name of his father, he gives them my boyfriend's name. My mother told me that I should let my son spend time with his father and he might change his attitude towards my son, because my son is the 'dead stamp' of him. My boyfriend does not want him to have anything to do with his father. Please for your advice.

I understand how your mother feels. Your child's father felt insulted by your daddy when he suggested that he should at least provide pampers for his son when he was a baby.

Even if he felt that you had other guys in your life, he should not have said that to your father. He was rude and out of order, and he knew he was lying.

I am glad that you have found a man who respects you and who is taking care of your son as his very own. He is a good man, and that is what good men do.

As to whether you should send this little boy to visit his father, I must say, not at all! Your son's biological father has never accepted paternity or supported the child in any way, so why should you ask him to allow your child to spend some time with him? I believe that your mother means well, but your son doesn't know this man, and you are not looking for anything from him, so unless this man changes his attitude towards your son, keep your son away from him.

He is a nasty guy, and he has tried his best to tarnish your reputation. Let your boyfriend continue to play the father role for your son.

Concerning your siblings who are always borrowing money from you, perhaps they will not change until you get tough on them. Some relatives are like leeches.

You are under no obligation to constantly give them money. I don't mean to imply that you should never help a brother or sister that may need help from time to time, but you should not give them the impression that they can always get money from you because you are loaded and you don't have any use for money.

Tell your relatives that you are unable to meet their requests and that you have your own obligations. Tell them that they should seek jobs and support themselves.