Rastas aren’t doing anything for Jamaica 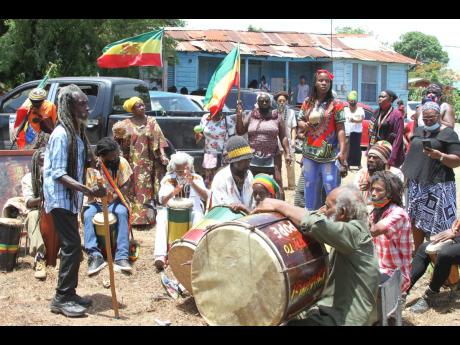 Members of the Nyabingi Order.

God made women to be supportive to men, but as one caller on the Dear Pastor Talk Show said, "If you were to tell women today that God has put the men in charge of them, all hell will break loose."

The women are changing God's order and this has caused an imbalance in the world. Pastor, a caller has been taking you for a ride. On the show when you asked him about the role the Rastafarians' community has played in society, he skilfully went around you and changed the subject. I have written to various talk shows and I have asked what are the contributions these Rastas have to show for their many years in Jamaica? They curse and criticise the church, yet the churches have built schools, hospitals, supermarkets, farms, and universities. They have legal services, counselling services, and many other activities, but the Rastas are so disorganised and constantly cursing the churches. The Rastas cannot even secure Pinnacle, Scott's Path and a better deal for the suffering Rastas at Coral Gardens. I have found them to be talkers and very little doers. One caller is using your show to promote his religion and he is bringing down your show.

It is evident from your letter that you do not appreciate some of the comments this caller has made on the Dear Pastor Talk Show." Frankly, I am not annoyed by what he says from time to time. And I know from the feedback I get from other listeners that many appreciate his input. Many of the things that he says should be taken seriously, but there are times one may find that his contributions are not based on facts. He twists the scripture to suit what he believes, but I believe that most listeners do not take what he says seriously. His comments, however, on many topics should not be ignored.

I consider him as a friend. We don't see eye to eye on many things and that is because he does not embrace Jesus as man's redeemer and God that was manifested in flesh. He claims that Haile Selassie is God, but I would not break friendship with him over his beliefs. And he is free to call the show at any time and to make his contribution.