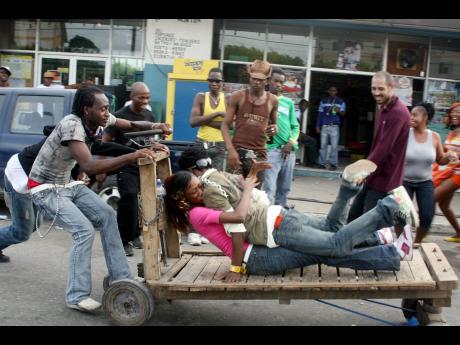 In this file photo, two patrons were seen gyrating on a handcart at a staging of Passa Passa in Kingston.

Dancers are said to be turning up at dancehall events with handcarts as they seek to latch on to a new craze that has entered the dancehall space.

The dancers, who are responding to a comedic single done by dancehall artiste Sol Weatherman, perform acrobatic dance moves and bold 'daggering' stunts on these handcarts.

Sol, whose song is titled Handcart, told THE STAR that the concept is a win with fans.

"Whenever the handcart segment of dancehall starts, everyone take out their phones and start to record the action. It is like everybody come out to see the cart. The handcart itself is a star inna dancehall, that is why we gone viral," he said.

"If the selector takes too long to call for the handcart song, the females will start shouting on the top of their voice ... . I was surprised and excited when I saw the high energy the handcart brings to the dancehall space. Shelly Belly even dance on the cart until it damage," he said.