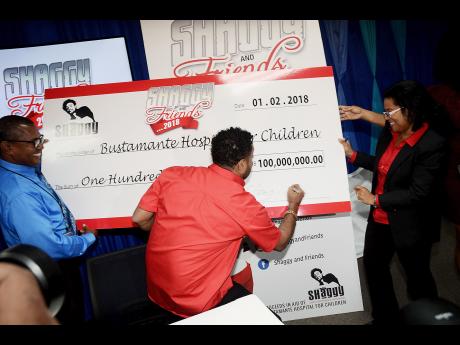 Entertainer Shaggy (centre) puts his signature on a symbolic cheque for J$100 million that will be going to the Bustamante Hospital for Children. The money was raised from the Shaggy and Friends Concert held on January 6. Holding the cheque are Anthony Wood (left), CEO of the hospital and Dr Michelle Ann Richards-Dawson. 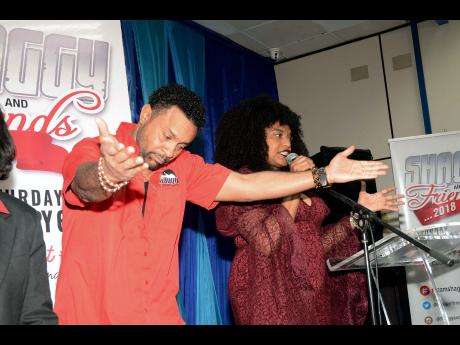 Entertainer Shaggy soaks up the applause from the audience at the cheque handover yesterday.
1
2

When international recording artiste Shaggy announced last December that the Shaggy and Friend 2018 concert had a J$100 million target, he was confident it would be reached.

Shaggy's confidence was justified when he handed over a cheque for that amount to the Bustamante Hospital for Children (BHC) at its Arthur Wint Drive location yesterday.

The charity concert was held on the lawns of Jamaica House early last month.

This year's proceeds will go towards several different ventures in the hospital, but mainly the Intensive Care Unit (ICU), which currently has a total of five beds far fewer than the required amount.

Before handing over the cheque, Shaggy thanked all the performers, sponsors, and other entities who took the time to lend their support.

He, however, emphasised that the expenses from the government agencies were "ridiculously high."

"What we are doing is helping a government-operated hospital, that's all me a say. We are trying to make it easier for the Government and to ease a burden," he said.

The expenses incurred from government agencies amounted to more than $1.2 million.

Shaggy further stated that he and the team at the BHC would have to think of a way to execute and meet the ICU dream.

"The ICU is very small and cannot even hold an extra bed so we have to find a way to move forward. We are still going to need partners, which includes a good and affordable construction company. We also have 150 pieces of medical equipment to turn in but we need to have the building ready first," he said.

Since its inception in 2009, the concert has raised more than $400 million for the hospital.

He stated that the Shaggy and Friends foundation operates the organisation under full transparency and can easily give account of the funds accumulated and the expenses incurred.

The breakdown is as follows: