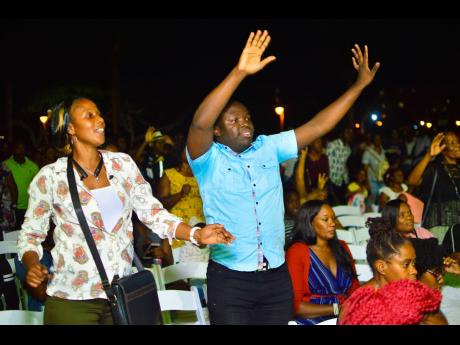 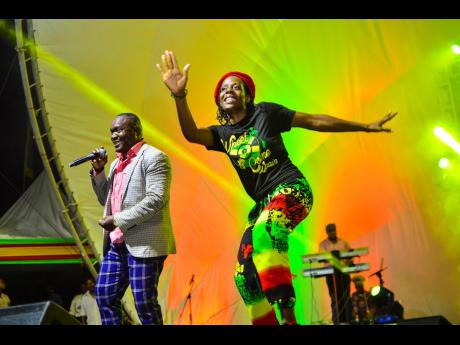 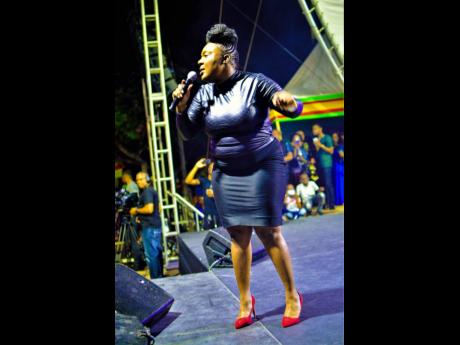 Just in case everybody didn’t know, “Sin nah wear again!” Those were the words of Jamaica Cultural Development Commission (JCDC) alum, Ryan ‘Testify’ Davis, before he exhorted the crowd to “buss a worship” inside Emancipation Park in Kingston, at the Ash Wednesday curtain-closer for Reggae Wednesday.

And sing and dance they did, even as they ‘bussed’ several blanks at that ole devil called Satan. Spirits were high dancehall ‘stylee’, and the people who gathered in the park represented what was the biggest crowd the weekly Reggae Month free concert has seen since its blast off on February 5.

Davis, who gave songs such as Captain of the Ship and Mighty God, made sure to perform the people’s favourite, Satan A Go Mad over Me, a punchline-dipped offering which sent the massive into a frenzy. “Satan a go mad ova mi...Blow!” he shouted and the crowd picked it enthusiastically. The only difference between his entertaining performance and that of a secular dancehall act was the actual lyrics, and one had to listen carefully to hear them. But, no doubt about it, the crowd loved every second of it.

By contrast, the 2019 Digicel Rising Stars winner, Sherlon Russell, showed the calmer, but no less potent side of gospel. With songs such as Stayed Connected and If Jesus Comes Tomorrow, Russell sang his way into the hearts of those who have an appreciation for the message-filled gospel music. He was followed by the Katalyst Crew Aggregation, a complete outfit comprising musicians and singers, led by Shalom.

Their rootsy gospel style was punctuated with alternate references to both Jah and God, and they entertained with song such as I Rise and Can’t Live Without You. Rastafarian singer Koriq was invited on stage during their set, and he connected with a song exhorting the people to give thanks and praise instead of fighting and complaining, because “every day above ground is a good day”.

Singer Rondell Positive, who has a desire is to inspire Christians to celebrate God’s love, has a voice that stirs, and it is no wonder that his popularity within this arena is soaring. The Cover Me and More Than a Conqueror singer was the crowd favourite and by the time he was finished, most persons had jumped out of their seats and had indulged in either foot-stomping dancing or the frenetic hand swirling over the head action, or both. He is in promotion mode for his latest song, In The Mirror, a positive, conscious song, rather than gospel, and was dressed in a T-shirt bearing the name of the song.

Rhoda Isabella caught the spirit and continued where Rondell Positive left off. Dressed in form-fitting clothing, there was nothing to restrict her energetic movements across the entire stage, not even her spiky red heels. Among the songs she performed were No Longer A Slave, Philosophy, Still Breathing, and an uptempo medley of gospel favourites.

Levy’s Heritage, comprising the children and the father, performed separately and were awesome.

Reggae Wednesdays series was staged by the Jamaica Reggae Music Industry Association, as part of the Reggae Month hectic package of activities.