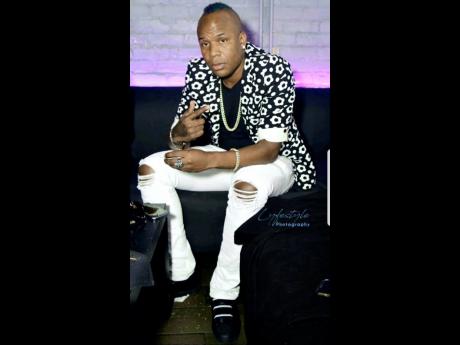 With the vast majority of the entertainers and key players in the entertainment circuit being male, women have long struggled to earn a seat at the industry's table.

But, that may soon change as dancehall artiste turned producer Delomar pushes his debut solo project, the Pink rhythm.

In an interview with THE WEEKEND STAR, Delomar revealed that he has long wanted to change the modus operandi of the entertainment world to give talented female artistes the opportunities he believes they deserve. Eleven women have voiced a track on the rhythm.

"Mi wah see more woman in a di business. I want to see them getting more opportunities and having more control so that is my mission right now. Mi know of whole heap a instance weh female get rejected and mi a talk bout bad female artistes and mi kinda blame myself for not coming to their aid earlier," he said. "COVID come down now and yuh really a reflect on the industry and everything, and mi really medz the problems and start think about solutions. Weh mi a strive fi do is fi make producers start to voice all females or at least balance the scales. Mi wah promoters book more woman. Mi just wah the industry start pay more attention to the females because a nuff bad artiste out deh."

Delomar added that the project is more than just an opportunity to earn an extra income, he is going to be the "agent of change".

"And the women are longing for that change because when I reached out, all a dem said yes without hesitation. These 11 females united. They saw the bigger picture and they all wanted it to work so they really came together and made it happen," he said. "D'Angel, Macka Diamond and Pamputtae as established acts really came out and supported the vision and their efforts played a huge part in getting the riddim to where it is. They don't only preach female empowerment but they live it. So far, all the hard work has been paying off because people are really paying attention to the riddim."

Goody Plum, who revealed that her song Tun Up has been doing extremely well, said she knew Delomar would prove all the naysayers wrong who say women are hard to work with.

"This is the first song that I have put out there that getting so much traction and airplay and I just want to say big up Delomar for putting together this track and for giving us females a chance to shine," she said. Fast-rising dancehall artiste Tallup, who voiced the song Own, said the rhythm has united many women.

"We are all in one environment promoting one riddim with the same goals. None of us are pretending and the energy is just right. Everybody is so happy," she said.

Pamputtae said more efforts like this are needed because "the cake big and all a we can share it".

"Most times if yuh check back the hot riddim dem, if it have 10 songs, nine a dem a man and di one song weh come from the woman not even a get no play. So di woman dem need more strength and more a da platform yah," he said.