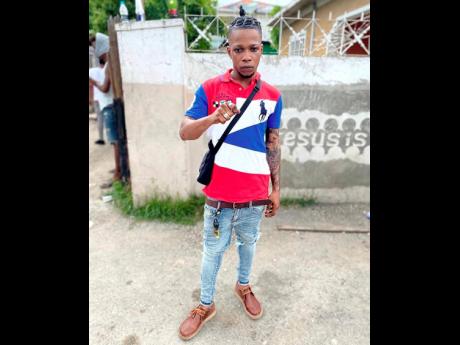 Spanish Town has produced a number of top musical acts over the years including Chronixx, Koffee, Govana and Jahmiel.

Rising deejay Siva Hotbox is hoping to score similar success. His latest single, Piece a Dutt, could be the one to open doors for him musically. Released last October, Piece a Dutt was produced by Quantanium Records. The official video has so far garnered more than 100,000 views on YouTube.

"I am so excited about the work that I have been doing in the studio. I have been putting out some very good songs which have received overwhelmingly positive feedback. This just motivates me to continue on the journey," Siva Hotbox explained. The dancehall artiste says his love for music developed from an early age.

"I grew up around music. I saw a lot of my relatives doing music, from playing on sound systems to performing at community events and even taking on major stage shows. I do it because of the love I have for music," he shared. Siva Hotbox has been receiving support from his March Pen Road community. He says the support has made him push even harder to achieve that musical breakthrough.

"The support of my community is very important. When you have a community backing you, you know success is not far away. My community respects my profession as a recording artiste," he added. With his unique style and a sound that captivates the most discerning eardrums, Siva Hotbox says he is into music for the long haul.

"Nobody told me that music would be easy but you know we are built for any journey. Dancehall music and me are compatible," he said. Among his other releases are Non-Stop, Life Liva and Pon E Villa. His overall objective is to make a positive impact with his music.

"I want to have a legacy with nothing but the greatest, contribute to society by feeding souls with unforgettable music and to inspire others," said Siva Hotbox.