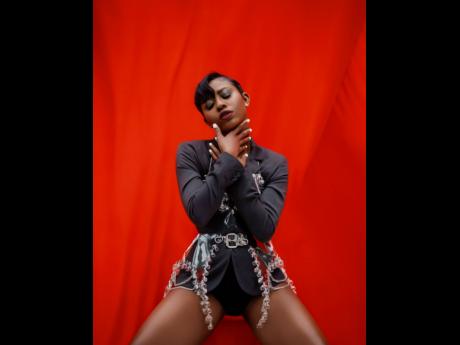 Although she gained national prominence as a YouTube vlogger, Bella Blair admits that it is music that truly has her heart.

"Bella Blair, the comedian, was a 'buck up' situation. I was at CARIMAC (Caribbean Institute of Media and Communication) doing media studies and I just got my MacBook Pro and downloaded an editing software and I wanted to try it out. I figured, 'How am I going to edit when I don't have any content?' and so I wrote up a script, got costumes together, filmed different characters and then edited them together, and put it up on Facebook and YouTube," she said. "It was just literally for fun and to see the reaction of people. When you can make people laugh, it really and truly is a gift that is heart-warming."

But while viewers were being treated to amusing pieces, she was unfulfilled.

She told THE WEEKEND STAR that she even went through a brief spell of depression trying to keep up with her growing YouTube fan base.

"The plan was to do music right after school but because I got caught up with the whole comedy thing, there was now a demand. I couldn't just jump into it (music) right away because people would be like 'Wait, what are you doing?'. I was sad because here I have this dream that's not being fulfilled and I am doing something that I totally do not want to do. I decided 'Hey you know what, no more of this. I am going to do what I want to do' because what's life if you're living for other people?"

She took that leap into music in 2016 with her debut single Jamaica and has held a steady footing on the music scene since. Dubbing music her 'happy place', Bella Blair, who recently gave birth to a baby girl, says she is looking forward to releasing new music. She pointed out that pre-pandemic, she had written and recorded new songs and revealed that an EP is coming.

"True artistes evolve over time and I have matured so much in more ways than one. My voice has gotten better, my stage presence has improved, my writing has improved. My EP will be a true proof of that growth," she said.