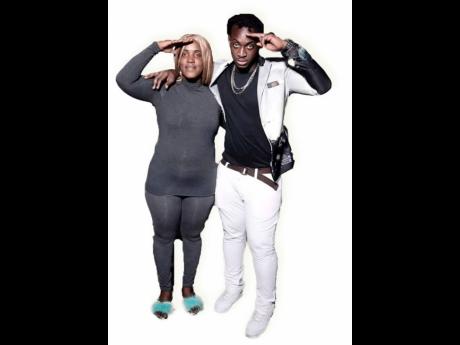 Ele Trunk and his mother Shauna.

Ask him his name and the answer is swift and serious: "Ele Trunk the girls dem veggie chunk."

But the 25-year-old up-and-coming artiste says his favourite dish is curried chicken and white rice, especially cooked by his mother, Shauna Stamp.

Ele Trunk, whose given name is Ashanti Oniel Bryan, is no stranger to the music business. In addition to having music in his DNA, he had a collaboration with Gaza Kim in 2018 and, prior to that, found moderate success with the song, Tired (of the Lies), a single which Bounty Killer had pushed by posting it on his own Instagram page.

The artiste took a step back from music in 2019 and has returned with a single titled, Mommy Daddy, a tribute to all the mothers who are playing the dual role of mother and father.

"My mother has always been there for me, but I felt like I was pressuring her too much, because everything was on her financially, as a single parent. Music business is expensive, especially when you don't have a steady income. So I got my finances together and I am back with my first official single," he said.

The song was released this week, in time for Father's Day. Although it is in praise of mothers, Ele Trunk says it is not intended as a diss to his biological father, the deejay who he is named after.

"I'm not trying to throw stones at anybody, it's just that the energy was focused on appreciating mommy. And, really and truly, she loves it. She said that for my stepfather, tears came to his eyes the first time he heard it," Ele Trunk explained. The entertainer is also in the process of rebranding himself and intends to ditch his moniker for "something more real and genuine".

Ele Trunk, who hails from Seaview and Riverton City, has been passionate about music since he was a child, but he also focused on his schoolwork, graduating from Denham Town High School with five passes in CXC. He has recently launched his own record label, Legion Records.