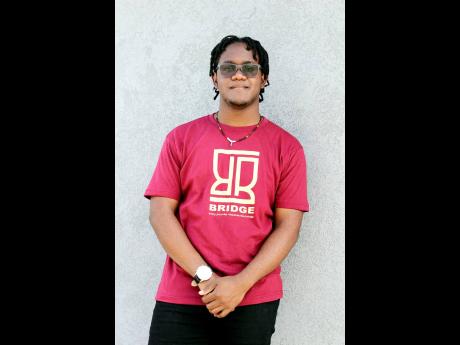 Rising social-media sensation Steam, also known as Yung Mineral, admits that while growing up he was always known as the 'class clown'.

It was a title that his father, the late entertainer Cleon 'Mineral Boss' Jones, told him to be mindful of, especially with society's perception of people who are labelled that way.

"Him always used to say, 'don't run too much joke and make people take you for nuh clown' even though he loved to joke around, too. He understood that getting a title like that had its pros and cons," said Steam, given name Cleo Jones, in his recent interview with THE WEEKEND STAR.

He said that while attending Kingston College, he sold lemonade and found full classrooms to do stand-up comedy to attract schoolmates to make a purchase. But he got the nickname 'Steam' after a minor accident.

"Long story short, after steam from a pot burnt me under my eye, my cousins teased me by calling me that. I represent it, as something that is hot that rises," he said.

However, in 2017 when his father was killed near their St Catherine home, Steam, who was about to sit the CXC examinations, said comedic videos helped him cope. The teenager studied these for hours and they influenced him to take the clown act to the next level.

"I grew up on the likes of Oliver Samuels and Steve Harvey, the classics, then I started to see younger acts like DC Young Fly and Trabass from his Vine days," Steam said. "I saw my father do entertainment and he always told me to believe in me; he is the one who taught me consistency. I try not to remember his death, although it is part of my story. He is always with me, I keep his driver's licence in my wallet, it's right there when I open it."

Steam, 19, who is the eldest of four children, said that his father's death forced him to grow up very quickly. He plans on enrolling in the University of Technology Jamaica to study business, and on expanding his career as a stand-up comedian.

"I took the place as man of the house and it did have an impact on my maturity. I continue to get strength from all that has happened and from my mom. I don't see what I do as a waste of time, and instead of studying performing arts, which I believe is talent someone is born with, I want to do business so I can make it a business," Steam said.