Daddy Lizard happy to be ‘outside’ 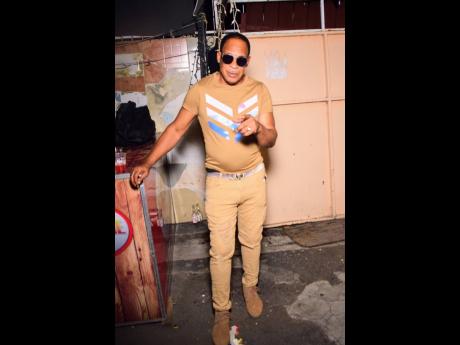 Veteran deejay Daddy Lizard says that he feels 100 per cent better now that the entertainment sector has reopened, and while he has not been partying every night, he has been supporting some of the weekly dances.

"It's good to be outside. Very good. We just need to do the right thing and follow the protocols because COVID not gone anywhere. But it is great to be here listening to some good music," he told Weh Dem Up To, while enjoying himself at Weddy Weddy Wednesdays recently.

"During the COVID, dem seh we must tan a we yaad. And since we couldn't party, we live inna the studio and do a whole heap of work. The good thing is that I have a little studio at my home and so we record a lot of tunes," the Run Girl Run singer added.

He shared that he has an album that is near completion, with only two songs left to be mastered, as well as an EP in the works and a handful of singles.

"I want to drop the EP first, with about six songs, and give the people something to gwaan listen to. I also have two songs with my son, Mickhail, aka Ghetto Rich Boss, that I am promoting now. The most recent one is Thick, and the video for it just dropped," the artiste, whose given name is Junior Lee Bryan, stated.

Thick, a real girls tune, is an ode to heavyset females, some can be seen gyrating on Daddy Lizard in the video. According to the veteran, the females are loving the song.

"It getting nuff play at the gyms and when it drop in the dance, the girls dem love it. I witness that for myself," he said with a huge smile.

Part of his delight about Thick is the fact that it is a father-and-son collaboration. "Is a lot of youths I help out in the business, so it's time for me to help out my son now. He (his son) is a very talented youth and he did everything on the songs. He built the riddims, mix dem and produce them. The first father-and-son collab that we did a few months ago is titled Oh Yeah," Daddy Lizard shared.

In 1986, the Kingston-born entertainer started to deejay on a sound system called Rambo International which came from the same community off Red Hills Road where he resided. In 2018, the Kingston and St Andrew Municipal Corporation named one of the secondary roads off Park Lane in honour of Daddy Lizard.