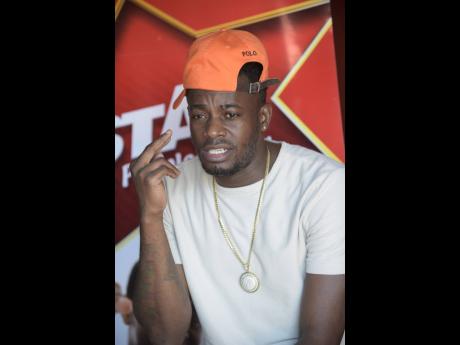 Ever since he released the summer scorcher Holiday back in 2009, dancehall artiste Ding Dong has never dropped the ball when it comes to crafting a hit for the season.

He admitted to THE WEEKEND STAR that when it comes to this time of year, his creativity goes into overdrive.

"I love to see people enjoy dem self so it's like a duty for me to drop the summer songs. When people a have fun through music and through dancing, it's a joy for me. So giving them these songs comes mandatory to me. It's like supmn weh instil in me, that this time a year we affi drop some bangers," he said. "Speaking of which we just finished recording a summer song for Romeich Entertainment that should be dropping this weekend called, Summer Vibes. That ago gwaan wid a bagga things. We have the Man a Star remix wid Stefflon Don weh a gwaan good right now, not to mention Yo Pull Up weh a get crazy reaction in the streets. The energy, joy and happiness weh everybody have when da song deh drop is everything."

The artiste shared that there is something special about summertime in Jamaica.

"It's something weh hard fi explain really. Yuh affi deh here a feel the energy fi really know weh mi a talk bout," he said. "And now especially, is like the summer enjoyment new to we. Mi nuh know if a chu outside open up back but the whole dancehall scene is like it fresh again and di songs dem a hit, mi nah lie."

Arguably his biggest track, Holiday catapulted Ding Dong into mainstream dancehall. "It was the only song that before I finish recording it, I knew it was a hit," he said. "It was just the whole feeling at that time. It was just needed." Ding Dong explained that at the time, the country was divided because of the Gully/Gaza feud.

"I wanted something to just calm down everybody again and so that's what I did with Holiday and I think it was the perfect time. After that song drop, it was like people were having fun again. It was just pure happiness," he said.