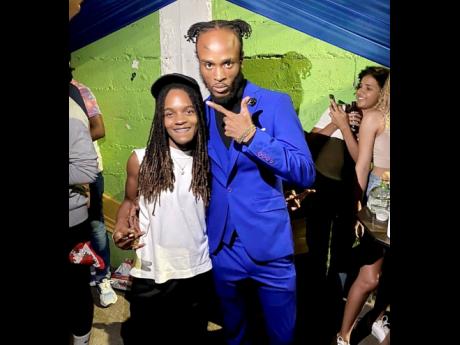 Dancehall artiste Kyodi is cementing his name in the dancehall space with his single ' When mi nice'. The catchy dancehall track has garnered over 3.2 million views on YouTube.

Kyodi recently released the follow-up to the hit, a single titled Mi nice mi nuh drunk, which is produced by Jag One Productions and Gold Up Music. It already has become a favourite of many dancehall lovers including Olympian Usain Bolt, who uploaded several posts of himself dancing to the song on his Instagram story.

Kyodi was elated when he received the weekly statement from the company. He immediately took to his Instagram account and shared the news with his fans. The deejay is very humbled at his current accomplishments and continues to put in the hard work.

He told THE WEEKEND STAR: "A long time we putting in the work so now that we reaping, it's a blessing. Big up my team as well, team work makes the dream work. There is a lot more work to be done so I will continue to work hard for my fans, my family and my community who first embraced my talent."

"Big up to corporate Jamaica who have also been reaching out. I recently did a commercial for BIP and I'm in talks with a few more top corporate brands."

The deejay also held a star-studded birthday party a week ago, which saw the likes of Koffee, IWaata, Yaksta, Nation Boss and 10Tik attending.