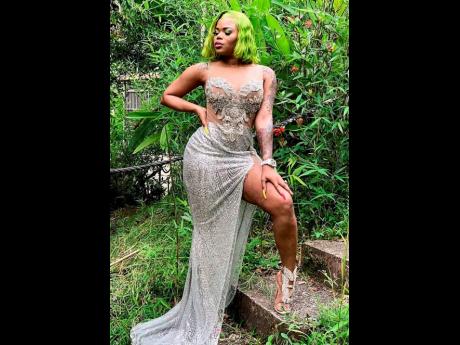 Queen Nikki is calling for more female artistes to speak up against violence against women, and also children using the platform to send a message that they will not stand for it any more.

Queen Nikki, formerly DHQ Nickeisha, shared that prior to having a major breakthrough as a dancer on the dancehall scene, she was pursuing a recording career under the moniker Nik Attitude. But after recognising the aim of one producer "to mix business with pleasure" the entertainer said she started on a different path.

Last Thursday was the International Day for the Elimination of Violence Against Women, and the start of 16 days of the Activism Against Gender Based Violence campaign to challenge violence against women and girls. It runs annually from November 25 to December 10 (Human Rights Day). This year's theme is 'Orange the World: End Violence Against Women now!'

In the wake of all the conversations circulating around women in reggae and dancehall, their sexuality and what they represent, former model and recording artiste Racquel Jones, expressed that dancehall music was partially to blame.

"How about we address the fact that dancehall music by our dancehall giants is the core basis that sets the standard for men to disrespect and abuse women in Jamaica. We have a culture built on disrespecting women and each other and dancehall is the soundtrack for that," said the Toronto-based entertainer in an Instagram post.

Having just released a collaboration with Stacious titled Dem Evil, which addresses the topic of violence and abuse against women and children, Queen Nikki does not agree that dancehall is to be blamed.

"Why are our women afraid to speak up?" Queen Nikki asked. "The problem is not dancehall, but that we as women, and the man dem too, are not using dancehall enough. Is a big platform and if we were constantly coming together as one to preach the message to end violence against women, from we heart, I believe it would decrease; maybe not 100 per cent, but it's a start."

She continued "When Stacious and I did the track, it was around the time all those children were going missing and the man dem were killing off the women. So it was the perfect time to get a message out there but it doesn't have to stop there."

Although she has experienced abuse within the dancehall, veteran deejay Macka Diamond also opined that the genre is not to be blamed for the ills committed against women.

"People listen to the music they want to, watch the movies they want but there are those that need to realise they don't have to act out the violence they hear and see. They just need to educate themselves. I also understand why a lot of females are still afraid to speak up but if they don't speak up, they will continue get abused or end up dead," said Macka Diamond.