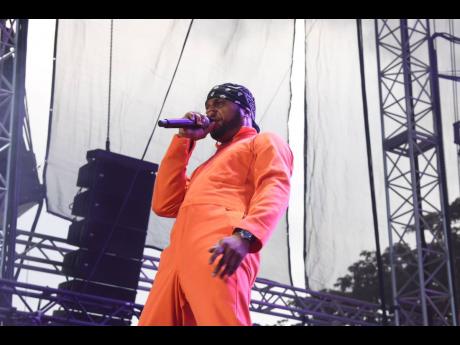 Dexta Daps takes the Reggae Sumfest stage, dressed in an orange prison jumper and black bandana, just as Vybz Kartel did 12 years ago. 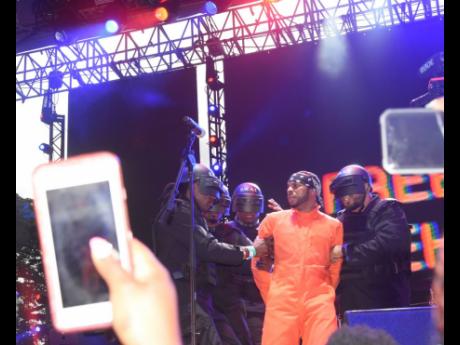 Accompanied by a faux enforcement team of officers, dressed in SWAT gear, Dexta Daps was in character.
1
2

At Reggae Sumfest 2022, Dexta Daps was definitely a 'Vybz'.

With the sun rising in Montego Bay, the 7/11 deejay entered centre stage handcuffed, in an orange prison jumper, accompanied by a faux enforcement team of officers, dressed in SWAT gear, against a backdrop of a news report that he was in police custody. Around his head was tied a black handkerchief.

But, even before he said it, dancehall fans had that deja vu moment. This was exactly how Vybz Kartel was attired when he performed on the same Reggae Sumfest stage in 2010.

"Sumfest, mi tiad a dem treatment here. A ghetto yutes mi a do dis fa," Daps shouted to rapturous echoes of excitement, which only increased in decibels from the moment he touched the stage until he opened his mouth.

"Seh free Vybz Kartel!" Dexta commanded and at 5:52 a.m., the Sumfest throng obeyed with gusto. It was hard to believe that they had been in the venue from long before midnight on Saturday.

"Mi remember a Sting, a this a di image di king come out inna. So mi just want represent fi him."

With that, Catherine Hall "neva good again". Dexta's tribute to Kartel captured the imagination of the massive and seemed to be exactly what the doctor ordered.

Twelve years ago, a triumphant Vybz Kartel performed on Reggae Sumfest Dancehall Night shortly after being released from police custody. Ever the showman, the Gaza kingpin thrilled fans by re-enacting his personal trials on stage and was hailed for "delivering a message of unity between Gully and Gaza".

Dexta's performance was already highly anticipated, and such a tribute clearly came from the heart, especially since he is one artiste who doesn't need gimmicks to get huge forwards from the crowd.

The No Underwear singer soon ditched the prison garb for his usual close-fitting pants and a long-sleeved shirt, showing off his buff physique and threw down a performance in his inimitable style, which balances raw dancehall with smooth-as-silk lyrics and flow.