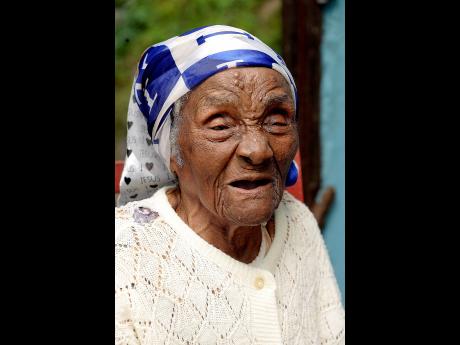 Lionel Rookwood/Photographer The spritely Alberta Thomas, 104, said she loves to give jokes. 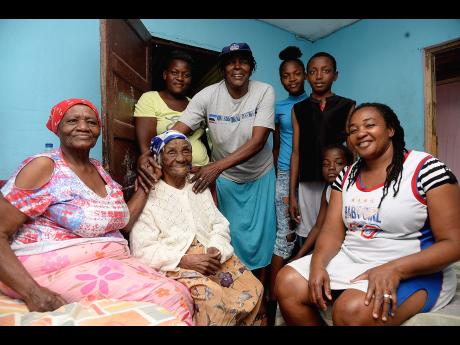 The rocky journey into the hills of Bellas Gate, St Catherine, did not prepare the news team for the warm welcome they received from Alberta Thomas.

Thomas, who celebrated her 104th birthday on January 19, was a bundle of energy when the news team entered her home.

When asked how she spent her birthday, she said that she enjoyed it very much because she sang and danced to the music that was being played.

"I was dancing nice and you couldn't know seh me a old smaddy," Thomas told THE STAR as she showcased some of her dance moves.

Not having the ability to stand because of a broken hip from last year, Thomas showed off her moves on the chair she was sitting on as family members laughed.

Thomas' daughter, Waneta, told THE STAR that her mother brings joy to the people around her and says that they are really happy to have her around.

"She give life around here man. If she never break her hip, a outta door you woulda come see her sit down," Waneta said.

Thomas, who was a domestic worker when she was younger, said that she did plenty of work, but age got the best of her.

But despite the effects of Father Time, she still does a little sewing every now and then to occupy her time.

"Mi used to do domestic work, go the market, and do a little sewing. Mi nuh dweet so bright, but me do me thing," Thomas said.

Waneta told THE STAR that her mother used to do everything before she fell last year and broke her hip.

"She used to wash and do everything herself. She use to 'paw' (grind) her chocolate because she nuh drink bush tea. Every morning or so, she go pick her chocolate and do her thing, but from she broke her hip, things affi slow down," Waneta said.

Thomas said that having her family around her makes her feel young, and she says that she does not give them any kind of trouble. She expressed that she is happy where she is and is looking forward to many more years.

"Mi nuh feel like me ago dead yah now. Mi not even look old. Mi nuh give them no trouble, mi only give them joke," she said, as the family burst out in laughter once more.