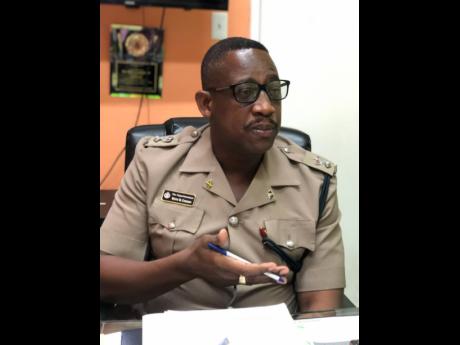 "I joined the police organisation because I had a feeling, as a young child, that it was my calling." These are the words of Senior Superintendent Wayne Cameron, head of St Andrew South Police Division, as he spoke about his decision to join the Jamaica Constabulary Force (JCF) nearly three decades ago.

Cameron, who hails from the small community of Marley Hill in St Catherine, is the eldest of six brothers. Before beginning his career as a police officer, Cameron completed his diploma in arts and crafts at the Mico Teachers' College in June 1991. A month later he was enlisted in the JCF.

"When I completed my teaching degree, I knew I would find policing easier than teaching, and I made the choice. Initially, my mother didn't want me to become a police officer, so when my mother found out I was actually a police officer she was a bit disappointed, but she learnt to accept it," Cameron said. "Now she is very proud of her son," he smiled.

Cameron is a product of the Graduate Entry Programme (now the Accelerated Promotions Programme), which he completed in 2001. "I was serving at the time and I had got to the rank of sergeant, so I did the entry exam and the cytometrics test, and was successful in joining the programme," he said.

The Accelerated Promotions Programme is part of the succession planning and development of leaders from within the JCF. It is aimed at increasing the number of senior officers in the constabulary by promoting members of the rank and file after extensive vetting and training.

Cameron, having spent 29 years in the police force, says it is the privilege to serve that keeps him coming back to the desk every day. He emphasised that he is naturally a motivated person who tries to be better than he was yesterday. He details that it is his love for the job, the respect he has for himself as a police officer, and his ability to stay motivated that keeps him coming back to the job.

He uses this dedication as a tactic in heading one of the Corporate Area's toughest police divisions, which is currently under a state of emergency.

"This division is very troublesome, so even at my dinner table I get calls sometimes. But I do take some time to go to the movies or the beach with my family," he stressed.

A graduate of Tacius Golding High School, Cameron is also the chairman of the Police Officers' Association.

When THE STAR asked how he would encourage persons to join the JCF, he had this to say: "I am usually invited to speak to males at their boys' days, and what I always try to do is to speak about the image of this organisation. It is a uniformed body, you earn a salary -- probably not the best -- but you become an established citizen in your society that has tremendous amount of authority that must never be abused, but the ordinary man looks up to you to use wisely," the senior cop explained. "Right away, being a police officer changes your entire outlook on life, whether you choose to become a policeman or a member of the military, it amounts basically to the same -- to serve your country."

Cameron's plans for the future are simple: "I intend to make Jamaica a better place to live; and in terms of upward mobility, the sky is the limit."