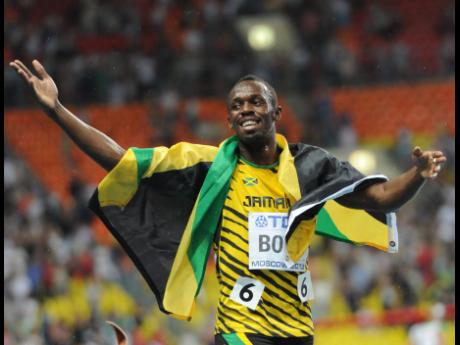 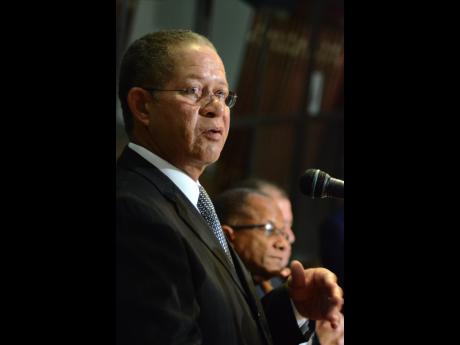 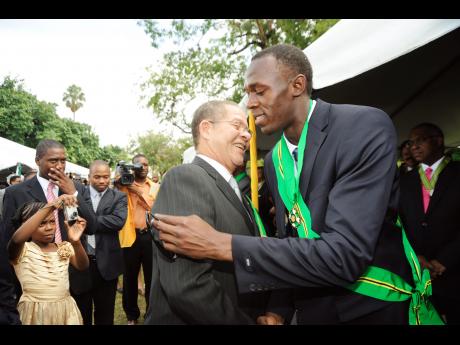 File photo shows Usain Bolt (right) being congratulated by Prime Minister of Jamaica at the time, Bruce Golding, folowing the investiture of the Order of Jamaica upon Bolt, during the presentation of National Honours and Awards on the lawns of King's House on National Heroes' Day in 2009.
1
2
3

Former Prime Minister Bruce Golding has described as shocking, reports out of Brazil and the United Kingdom which paint sprint king Usain Bolt as a womaniser.

"The reports are disturbing, and, if true, are far below what is expected of our most celebrated contemporary icon," the former prime minister said.

Golding, who was responding to questions posed by THE WEEKEND STAR, said "Bolt's management would clearly have dropped the ball, but he himself would have to take responsibility for his actions."

"Hopefully, this will be a wake-up call for him. I know he is smart and responsible enough to understand that he carries on his shoulders and in his persona the pride and adulation of millions of Jamaicans here and abroad, and I know him well enough to assert that he would never want to let them down," Golding said.

"This can pass and I am counting on him to make it pass," he added.

At age 30, Bolt is the first track athlete to have completed the triple triple after winning gold in the 100m, 200m and the sprint relay at the just concluded Rio Olympic Games. He struck gold in those very events in Beijing, 2008, and London in 2012.

However, the bombastic sprinter has been under heavy scrutiny since he was photographed partying with a bevy of women, one of whom he was seen kissing.

Bolt has a full-time girlfriend.

Meanwhile, Golding feels that Bolt has not done enough to be made a National Hero.

Golding said that the athletics achievements of the triple triple king do put him in in the same category as Paul Bogle, George William Gordon, Marcus Mosiah Garvey, Norman Manley, Sir Alexander Bustamante, Nanny of the Maroons and Samuel Sharpe.

Under Golding's watch as prime minister, Bolt in 2009, was conferred with the Order of Jamaica (OJ).

He was also given the diplomatic title 'Ambassador-at-Large', for his outstanding achievements in the field of sports.

One year earlier, in 2008, Bolt was conferred with the Order of Distinction in the rank of Commander.

The Order of Jamaica is conferred upon any Jamaican citizen of outstanding distinction.

Meanwhile, Golding, when asked if it was a mistake to make Bolt a member of the Order of Jamaica so early, said no.

"This was 2009. By then he had twice broken the 100m and 200m, records and led the relay team to break the 4x100m record. He was being awarded honours by various international organisations. Should a prophet not be without honour save in his own country? And what honour should Jamaica have bestowed if not the Order of Jamaica?," Golding questioned.

He noted that age is not a criterion in awarding national honours, pointing out that it is the quality of one's achievement that determines this.

"Who can dare question Bolt's outstanding distinction in 2009 and since then?" Golding asked.