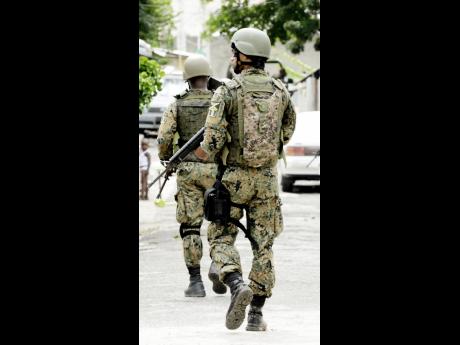 Members of the Jamaica Defence Force patrol the streets of Denham Town.

Some residents of the Denham Town community were spitting words of fury yesterday at the security officers who spoiled their funeral procession plans.

The funeral attendants said the authorities limited their freedom as they tried to send a friend and loved one away in fine style.

Residents said that they wanted to carry the casket through the community on their way to the May Pen Cemetery, where the deceased, a man they called Ratty, was to be buried.

"All we wah do a walk wid him body pass him home," said one resident. "Di soldier dem a try fi stop di funeral. ZOSO need fi come out a we community," said another.

However, the plan was stopped by security personnel who insisted the body would remain in the hearse. The team then escorted the hearse from the church to the burial site.

"Dem a gwaan like is a gunman we a bury. Him was a hard-working man. A rob dem rob him and kill him," another resident said angrily.

Another resident told THE STAR that she does not have a problem with the way the authorities are handling things in Denham Town because 'rules are rules'.

"A so people stay from day one. Dem always have problem wid di police, so dem a go fight everything weh police do," she said.