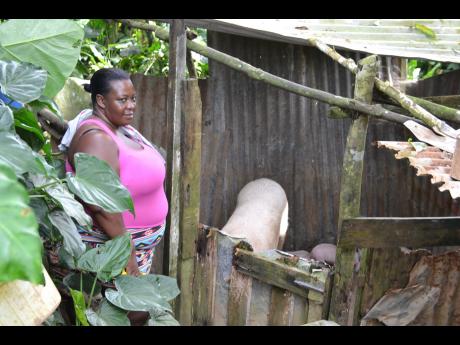 Cassandra Hector, who has been rearing animals for about two years, says she is willing to do anything to ensure her children get the best education possible.

The mother of three currently rears pigs near her house at King Weston in West Rural St Andrew. However, she says she has challenges making ends meet and has expressed the desire to raise chickens. The problem, however, is that she does not have the money to make the investment.

"Right now it hard to pay the bills on time. Mi have money but more while it cya stretch. Mi just waah buy some chicken and start do me thing," she said.

She said that taking care of the pigs takes a lot of money. She reasoned that raising chickens would be better business for her as the demand for them is stronger and it takes less time for them to come to maturity.

Hector said that he has already built the chicken coop, bought the shavings for the floor, and is hoping to get some chickens to populate it soon.

She said that she has raised chickens in the past but the business went downhill because she had to spend the money on her children, ages 18, 12 and 11.

Her aim is to start rearing chickens again, along with the pigs she currently has in order to make ends meet.

Hector said that her spouse plays his role in the family, but things are still rough because he does not have a steady job.

"Him do likkle mason work but sometimes him not doing anything. Mi just want to start rearing some chicken, yuh know, fi help me balance things out."