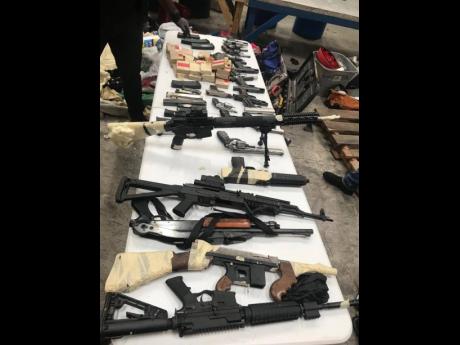 Up to press time yesterday, law enforcement groups were still gathered at the scene of a major guns and ammunition find at Port Bustamante in Kingston.

Information reaching our news desk is that investigators were stripping the container in search for more weapons and ammunition.

The shipment of arms, which reportedly arrived from the United States, was discovered yesterday afternoon, while security personnel were conducting what appeared to be an intelligence-driven examination.

THE STAR understands that 20 illegal guns have been seized, including six high-powered weapons and 14 handguns.

Our news team gathered that hundreds of rounds of ammunition were also unearthed.

An Uzi sub-machine gun, an AK-47 rifle, a sniper rifle with a tripod, two M16 rifles and a Tommy machine gun were among the arms shipment.

Eight revolvers and six semi-automatic pistols have also been seized.

It was not disclosed which destination in Jamaica the shipment was intended for.

The police via an Instagram post confirmed that a joint operation between Jamaica Customs and the police at a container terminal in Kingston led to the seizure of the weapons.

THE STAR made several attempts to speak with Assistant Superintendent Dahlia Garrick, however, calls to her cell phone went unanswered. Investigations are ongoing.