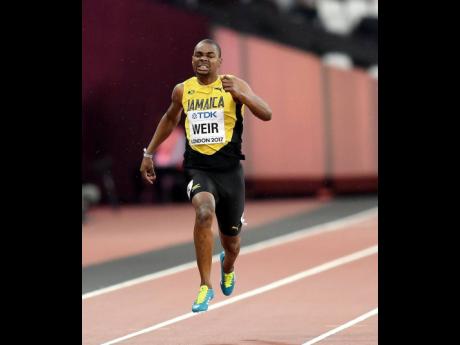 Olympian Warren Weir, who is a former Calabar High school star athlete, has called for the removal of current acting principal Calvin Rowe as head of the Red Hills road-based institution.

The athlete, who is usually very vocal on social media, took to his Instagram page yesterday, calling for Rowe to be removed.

"Give us a leader not a PUPPET... ," Weir wrote in the initial post.

Calabar has been in the news recently as the head of the physics department accused two star athletes of assault.

The school was again the topic of discussion yesterday after the revelation of a video that shows students, who were in devotion at the school on Monday, chanting derogatory slurs "KC (arch-rivals Kingston College) a b@$$% man school". The boys were in the company of adults.

Last Saturday, KC dethroned Calabar as Boys' Champs winners. Calabar had the crown for the past seven years.

In a follow-up post, Weir wrote: "My biggest problem with Calabar is the lack of proper leadership, the prioritising of winning over the welfare of students, and the clear misguiding of the youth. I am publicly calling for this to be addressed, and (as) someone who attended the school, I can clearly see what some of the issues are. Mr Rowe is a big part of the problem ... ."

Both the Education Ministry and the Calabar school board have since responded to the incident. Calabar and KC are to have a joint devotion today.

The education ministry has also reported that the administration at Calabar has agreed to issue a public apology to students and staff of KC arising from the viral video.

Additionally, the ministry said the board at Calabar has launched an investigation into the matter and has committed to providing a report to the minister by Friday.