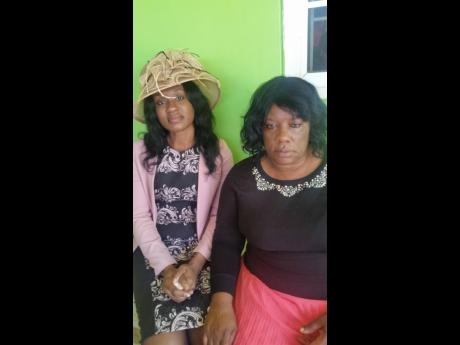 Ramona Wilson-Brown and her mother Murine mourn the loss of Romel.

Shauna-Kaye Wilson cringes in fear every time she hears the sound of a motor cycle.

Two years ago, one nearly took her life, and last Thursday, her father Romel Wilson, was killed after he was hit by a motor cycle, metres from his home, where a wake was being held for his mother.

"Two years ago a motor cyclist ran into my shop and almost severed my leg. It was my father who ran to my rescue, bandaged me up and took me to the hospital. Now Thursday night he is lying on the ground dead, the victim of a motor cycle accident. I have not yet cried. All my tears have dried up. It hurts deeply," she said.

Her brother Romario Wilson said he is working on a jigsaw puzzle.

"I am in a dream world and I am putting the pieces of the puzzle together, which on completion will tell me he is not dead," he said.

He said that when he saw his father lying dead on the ground, he told himself it was really a mannequin.

"Minutes earlier, he had just stirred the pot of soup, which was being prepared for my grandmother's 'dead yard'. All food went sour, nobody could eat," he said.

According to him, every Friday night from now on will bring back painful memories.

"He played music at the shop operated by my sister and I," he said.

Another daughter Ramona Wilson- Brown, fighting back the tears before she left for church, told THE STAR: "It is hard, it is sad. I can't come to terms with him dying like that. The last thing I heard him say was: 'Unu good?' as he spoke to his friends. Moments later he was lying on the asphalt dead."

She remembers her father as one who loved his children.

"He encouraged us all, took me and my sister to 'Bend Down' shopping and taught me to use cow skin to make juice. I am hurting extremely deep down inside," she said.

"My pressure went through the roof. I got one injection as the doctor tried to stabalise me. The moment I returned home the pressure went up. They had to take me back for another injection," she said.

Murine, the mother of Romel's six children, said: "Everytime somebody passes by and say 'keep up', I feel deep pain. The memory of his death in such a way comes back multiplied so I mainly stay inside."

She described Wilson as one who was caring and loving, and who "loved us all."

Romel's brother Federick said: "I have been out preaching and praying trying to find out why. It doesn't seem natural."