Uncle Son’s ‘power water’ was second to none 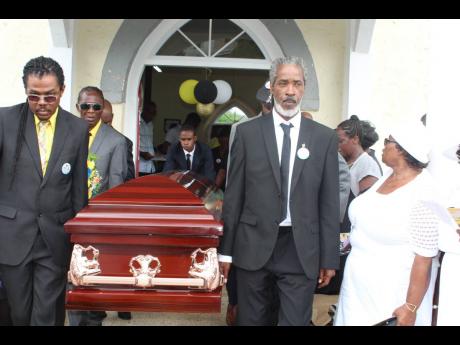 Pall-bearers carry the casket from the church after the thanksgiving service. 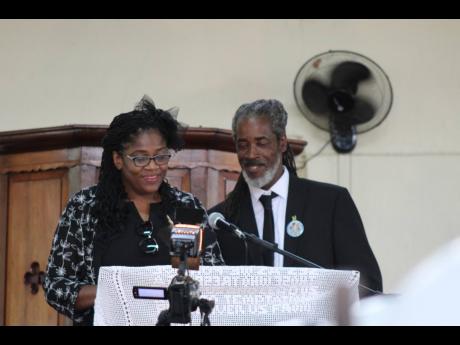 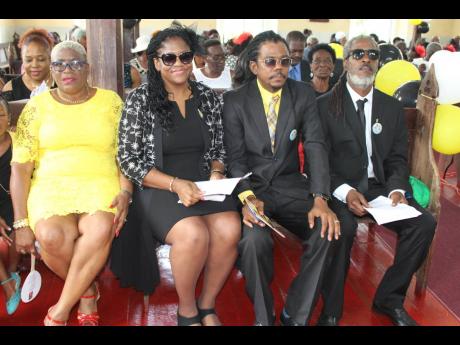 Annette Campbell and Augustus Bowers remembered "waking up to the sound of a squealing pig or a 'meh-eh-ehing' goat'" as their uncle, Gladstone 'Uncle Son' Stubbs, a master butcher, carried out his weekend activity of providing choice cuts of meat.

They were delivering the remembrance for their uncle at his thanksgiving service at the Ulster Spring Baptist Church last Saturday.

As they read alternate chapters of the penned remembrance, the congregation was given a glimpse of Stubbs' life.

"We never grew up with our father in the house, so he (Stubbs) was father and uncle, instilling discipline and guidance to his nieces and nephews. He was a master butcher and a serious farmer. He planted sugar cane and yam on the fertile lands now being threatened by bauxite mining," said Campbell.

She also could not resist mentioning her uncle's skill as a cook.

"There are people who fry chicken and boast that they have a secret recipe. But Uncle Son had a special recipe for his 'power water' (his popular soup). Nowhere else in the world have I tasted any power water to match that which he cooked," she said.

Another niece, Claudette Rickards, delivered the eulogy. She said that Stubbs cared for all of his nieces and nephews.

"He was kind to all and wasn't partial to who he gave yam and choice cuts of meat. He married his childhood sweetheart in 1993. Their union produced seven children. I am lucky to have had him as an uncle," she said.

Elaine Muir, a deacon at the church, could not help mentioning Stubbs' power water, either. Stubbs was baptised in 1990 and immediately took over the cooking at all occasions when meals were to be prepared.

At Harvest, his power water was finished as soon as the sale started.

"Many persons wished that Harvest was more than once a year," she said.

Pastor Marvin Hardware encouraged the congregation not to weep for Stubbs.

"Celebrate the life that God gave him and the way he impacted the community," he said. His body was buried in the family plot at Sterling Hall in Dutch Hill.