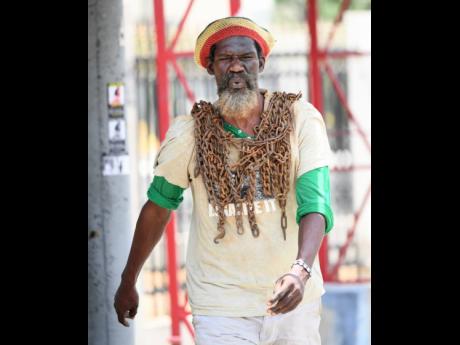 Derrick ‘Black X’ Robinson begins his 10-day walk around Jamaica today. His mission is to ensure that Chief Tacky becomes a national hero. 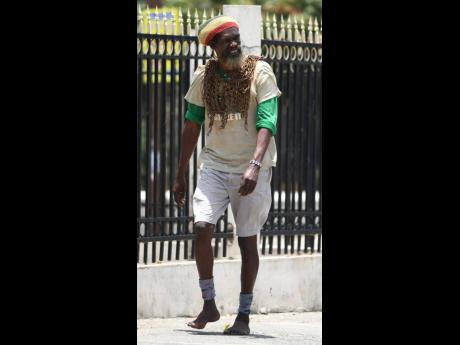 Without shoes and with a 30-pound chain around his neck, Derrick ‘Black X’ Robinson, in this 2018 photo, walked from St Mary to Kingston in his quest to make Tacky a National Hero.
1
2

For 12 years, Derrick 'Black X' Robinson has been walking from St Mary to Kingsto n in a bid to force the Government to declare Chief Tacky a national hero.

He is at it again, but this time his trek will not take him to Kingston alone. He will be walking right across the island.

"Tomorrow (today) I will be starting what I will call a 10-day walk. I'm going from St. Mary through St Ann, Trelawny, St James, come back down through Peter Tosh space there (Westmoreland), to Spanish Town. I will be finishing on the 24th in Stony Gut for the Paul Bogle candle lighting that they having prior to the day that Paul Bogle was hung, so we commemorating that," Black X told THE STAR.

"I am doing it because I'm celebrating a milestone that we have reached with the Chief Tacky mission. The St. Mary Municipal Corporation, at their general meeting, passed a resolution supporting Tacky being named a national hero and that's why I didn't walk earlier this year," said Black X, who usually makes his trek to Kingston on Emancipation Day.

"This is very significant, so this trip is to intensify the sensitisation, because the other parish councils will be called upon to support that resolution," he said.

Black X said that when he began walking to make Tacky a national hero, some people ridiculed him for walking barefooted. On his last outing, in 2018, Black X up the ante as he made the almost 37-milewalk from the St Mary Parish Library to the Emancipation Park in New Kingston, with 30 pounds of chain around his neck.

"We were ridiculed in the beginning years. People wondered why and they didn't understand. We didn't care because we are honouring our ancestors. We are remembering the struggle, the pain. So those people were just a minor inconvenience. For me, the walks were like my time machine going back to when we were shackled. Overtime, people have realised and became a part of the movement," he said.

The activist puts plans in place to sustain himself during these long, arduous walks.

"I keep remembering Tacky. I just remember the intricacy of Chief Tacky. Also, I have supporters right across parishes. You have people who know that I'm coming and I call them, so I always know where and when I'm going to stop. I travel lightly. It's is very rare that you travel more than a mile and there isn't a small business where you can get some refreshments. Money is always lighter to carry," he said.

He told THE STAR that he wants the public to assist the movement.

"What the public can do is look out for a petition that we will be launching, that will start as soon as the walk is finished. In the meantime, they can talk to their councillors and call in to various media houses and post on social media that they endorse Tacky being a National Hero. That is how I want the public to get involved," Black X said.