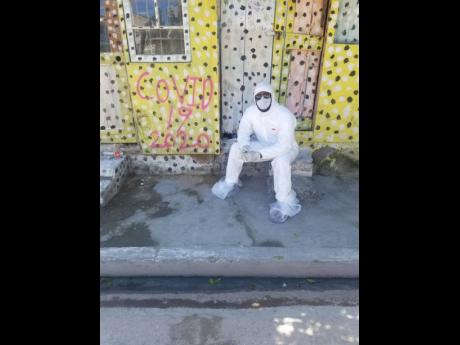 This Trelawny shopkeeper is taking no chance with the novel conoravirus.

What would you do if you went to your grocery store and realised that the shopkeeper was wearing a 'hazmat suit'? A Falmouth, Trelawny, shopkeeper has been dressed like this since Jamaica went into 'containing COVID' mode a few weeks ago, and he says that he has no intentions of stopping doing so until he feels it is safe.

"This is serious thing, and I am taking no chances. It is killing people all over the world, and I am not ready to die," said the shopkeeper who refuses to give his name.

Jamaica, as at Thursday, had recorded 47 cases of the dreaded COVOD-19 virus. Three persons have died from it. Across the world, more than 53,000 people have died from the novel conoravirus and over one million have been infected.

"I bought this suit and 100 gloves. When I use any glove, it is thrown into the garbage. When I go home, the suit is left in the garage. My sanitisation procedure is up to the max. There is nobody who is allowed to come near me. Social distance is practised," the shopkeeper said.

"People can cough in your presence, they can sneeze on you. There is no sign on anyone to say they have it, so I am taking no chances," he said.

Trelawny, as well as St Thomas and Hanover, are the only parishes in Jamaica without a reported case of the virus.