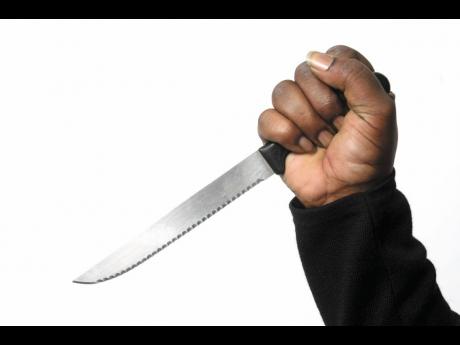 A man, who is allegedly of unsound mind, is in police custody after he allegedly stabbed his mother to death in Bottom Town in Clarks Town, Trelawny, on Tuesday morning.

Sylvia Ellison, sister of the deceased, told THE STAR that Vernon came to the yard saying that he was hungry.

"They told us Odaine had just killed his mother and they wanted to have their own form of justice. Odaine has since been transferred to the Falmouth Police Station," said Whyte.

As news spread of Ellison's death, Joyce Gibbs, a neighbour and friend, was overcome with grief.

"We wuk eena cane field fi years. Mi feel it to de bottom a mi heart," she said. Sylvia was also worried about her and Hyacinth's 95-year-old mother.

Delroy Anderson, a businessman in Clarks Town, said Vernon has been having issues for years. Anderson is sympathetic to those of unsound mind who are locked up in prison.

"I feel sorry for them, but relatives can't manage them. In the case of Odaine he refused to take his medication and when the public health people came, he would run and hide," he said.

Dunstan Harper, councillor for the area, said people like Vernon do not need to be sent to prison.

"They need to be placed in an institution where they can receive medical help and receive needed compassion. It should come down to regular monitoring of them to prevent another incident like the one today," he said.