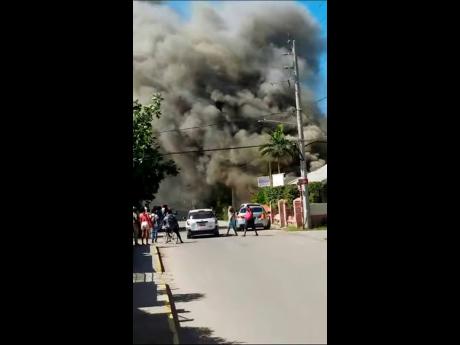 A massive plume of smoke to rises from a residence along Duke Street, Falmouth, Trelawny on Saturday.

About 11 a.m. on Saturday when Dawnett White and her family were in despair as a massive fire consumed their three-bedroom board house at 32 Duke Street in Falmouth, Trelawny, many of the onlookers had only one thing in mind - Cash Pot.

The fire, the origin of which is not known, destroyed the house and its content. It even threatened the life of a six-year-old girl, Zoelle, who was pulled from the burning house by two residents - Kemar Richardson and Randy James.

"The mother was outside bawling mi baby, mi baby inside. Kamar jumped the fence and ran through the fire. I was right behind him," said Randy James who braved the fire to rescue Zoelle. "Dawnett is like a mother to me so I know the house. I ran down the side, went through the back and grabbed the little girl," James said.

Richardson told THE STAR that when he went into the house he saw the little girl crying. "I just grabbed her and gave her to Randy, and we ran out with her into the crowd which had gathered," Richardson said.

As the fire raged, onlookers video recorded and took pictures while others spoke openly of their intentions to cash in on the 'big fire' rake by buying the No. 27 in Cash Pot.

"A di fus mi ever ketch so much money," said one man who claimed to have purchased No. 27 for the 1 p.m. draw on Saturday. "A whole heapa man ketch him," the Falmouth resident said.

Frank Cole, an operator at a Cash Pot outlet in the town, said he is not surprised that persons saw the fire as an opportunity to try their luck. "Everything for them is a rake. If they see two dogs mating, is a rake. This big fire rake was good for them," Cole said.

The big fire, however, was the worst thing to have happened to 53-year-old White, her 29-year-old son, his common-law wife, Danisha Gabbidon, and their child, Zoelle.

"Around 11 o clock I heard a popping sound. By the time I look the whole house just burst in flames. Neighbours wanted to help put out the fire but there was no water in the pipes. Nothing was saved but no lives were lost," Dawnett told THE STAR.

"Everything gone, including four puppies, who were just four weeks old," Dawnett said."The fire was big and with no water and a late arriving fire truck, there was nothing they could do. Many people bought Cash Pot. One of my friends asked somebody to buy the 27 and they bought number 2," one of the clues of which is small fire.

The Trelawny Fire Department is investigating.