80-y-o murdered in his shop 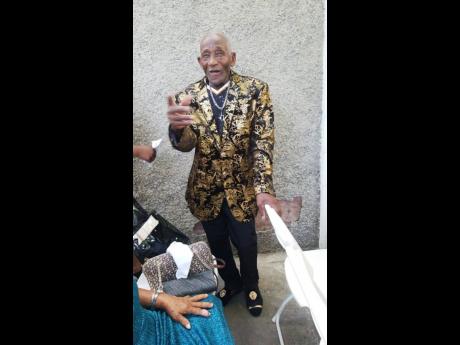 Last Friday when Evadne Tucker heard explosions coming from a shop she operates in Allman Town, Kingston, she called out for 'Dapper', her name for her husband Ransford.

But she got no response as Ransford, 80, had been shot. He was pronounced dead at hospital. Tucker is now questioning life and how she will possibly go on without her husband.

"Right now me don't eat from Friday when it happen. A just bare tears because me don't understand how them just take him life just like that," she said, as tears welled up. "A just leave everything in God's hands because at 80 them come kill my husband and we never involve in a nothing. Jesus help me!"

It was reported that about 8:10 p.m., Ransford was at his shop where he also lived on Robert Street when a lone gunman pounced upon him and opened gunfire, hitting him. Tucker, 68, said she and Ransford had been together for more than 50 years.

"A years now a the two a we through thick and thin, when we only have dumpling and butter and nothing to eat sometimes," she told THE STAR. "Me nuh how me a go manage because a just the two a we live here. If me a go cook little rice is him wash it and me put it on the stove. If a mackerel me cut up the onion and him fry it up. Me lower part a back sick so me can hardly bend and when me a bathe a him come wash me foot them and when me come out him olive oil them down."

Ransford's stepdaughter, Stacy Ann Brown, said the man she called 'Daddy' since she was four, was a "very descent man".

"He loved me so much even though I wasn't his child," she said. "To show you, everybody in the community come and a bawl because he was loved. If anybody come shop and them money short, him give them the goods anything at all them want."