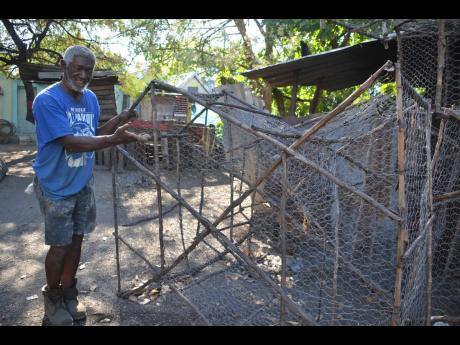 Alvin Facey has been making fish pots for decades and feels more could be done for the fisheries sector as it is important to Jamaica. 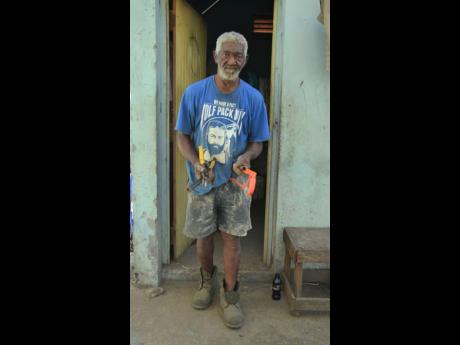 Facey shows the tools of his trade.
1
2

Vital to the job of the fisherman is his fish pot, and the fisherfolk at Greenwich Farm told THE STAR that Alvin 'Jabba Coconut' Facey is the man to speak to.

Facey, 73, has been a fisherman for almost four decades, finding his niche in the 1970s as a fish pot maker.

"I used to do fishing and I made them for myself. But then other fishermen used to ask me for it, so I realised this was something I could make a living from it. I never stopped since," Facey said. Facey said that a friend of his grandmother would always take fishes for him and his siblings.

"I always wondered where di fish come from, 'cause they were big and nice. So I used to come down here, and I started fishing with my brother. I would spend hours down here, 'til my parents used to ask 'Weh Alvin deh?'," he laughed. Facey explained that his first fish pot was made of board, but he found that to be too tedious and started using wire.

He said he and his brother Owen were a fishing duo and would often go on fishing trips together. But that ended more than 10 years ago when Owen migrated and later died.

"Now a just me one a do the fishing out of all my six siblings," he said. Facey demonstrated how to make a fish pot, which costs up to $18,000. He rolled out his quarter-inch wire netting, using stones to hold it firm on the ground. He then carefully used his scissors to snip the iron, creating a pattern for the fish pot. It takes up to three hours to properly create one.

"When I snip it like that, I can see the pattern, so the fish dem can go in a certain way. I going use the copper wire to frame the shape of the fish pot I want," he said, while explaining the different parts of the structure. He said a fish pot can yield catches of up to 500 pounds of fish on any given day. In less than half an hour, he completed the designs.

Though not being formally trained, he has been training younger men the skill, and believes more could be done for the fisheries sector.

"Nobody not taking on fisherman, nobody nuh have the interest of fisherman. Of course more can be done, so the Government can step in and help them, give fishermen bigger boats to go to sea, and better areas for us to sell our wares," he pleaded.