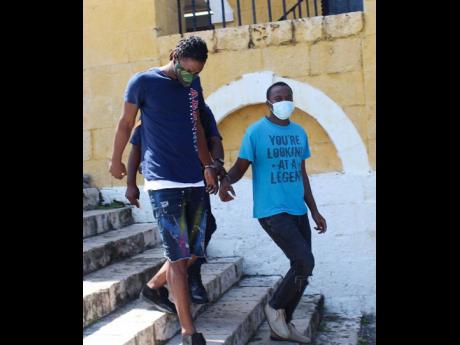 One of the attorneys representing two of the accused in the February 2 murder of Andrea Lowe-Garwood expressed concerns about the proceedings of their first court appearance yesterday.

Attorneys Martyn Thomas and Sewayne Phillips represented Javan Garwood and Dwight Bingham as they appeared before judge Stanley Clarke. Thomas was troubled by the absence of the third accused, Leon Hines, who reportedly appeared in court in Kingston last Friday.

"It is worrying that Hines was absent from today's proceedings. The incident happened in Trelawny and the court is here in Trelawny. I am not sure of the discussion Hines had with the Crown, but we will wait and see," he said.

Hines was remanded and is booked to appear again on February 18. It is reported that he is in discussion with the Director of Public Prosecutions in relation to the charges of murder, illegal possession of firearm, accessory before the fact, accessory after the fact, conspiracy to commit murder and misprision of felony.

Meanwhile, Garwood and Bingham arrived at court at 10:30 a.m., handcuffed together. They were not asked to plea and were remanded in custody. They are scheduled to return to the court on March 2. When the men next appear in court, Thomas said a voluntary bill would be entered and the matter transferred to the circuit court.

"The court was informed that the files are 90 per cent complete. At that time bail application will be made," he said. Lowe-Garwood was murdered as she worshipped in church at the Agape Christian Fellowship on February 2.