O’Derick Campbell loves being a CSI 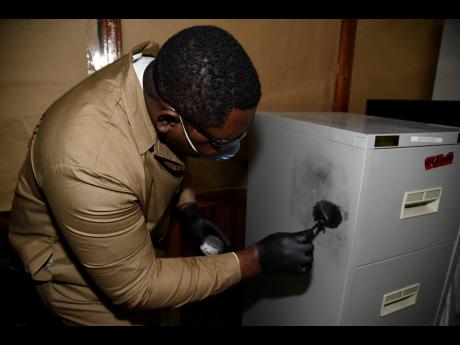 Campbell demonstrates how to dust for fingerprints. 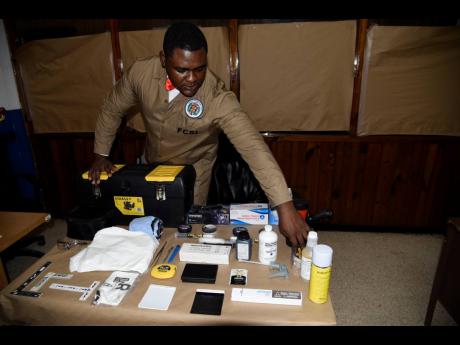 Campbell shows off some of the tools he uses. 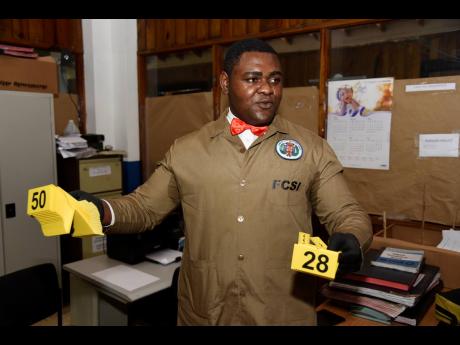 O’Derick Campbell explains what it takes to process a crime scene.
1
2
3

Most days, O'Derick Campbell can be found combing a crime scene, decked out in his white protective suit.

However, he was dressed in his conventional lab coat on Tuesday, eager to tell THE STAR about his job as a forensic crime scene investigator (CSI) from his office in St Catherine.

After leaving Kingston College in 2009, he enlisted in the Jamaica Constabulary Force without hesitation. It was a natural progression for him, having been involved in the Angels Police Youth Club since 2005. He started working in November 2010 at age 20. He was first posted at the Mobile Reserve but he always had a strong desire to be part of the Scene of Crime Unit.

"I was enthused about the work they were doing. As a matter of fact, I applied to be moved here when I first started but I wasn't accepted at the time. Then I moved from there to another section, and I applied again so I was always enthused," he said.

In November 2017, Campbell was transferred to the unit to complete a three-week apprenticeship. During a six-month period, he did on-the- job training, which was eye-opening. He remembered his first day as an apprentice, observing a post-mortem.

"First thing was the smell but being in the room for a little bit, you get used to it. The sights took a minute to warm up to, and seeing them cut into the body, I just took a step back and a deep breath and said 'this is the work'," he grinned.

Now he conducts up to seven post-mortems a day, along with collecting evidence for crimes such as rape, abductions and robberies. His job entails documenting crime scenes, and applying forensic methodologies and tools to collect evidence from those crime scenes.

"The thing is, through the training you would go through to get here, you would be exposed to certain things, doing post-mortems, coming in contact with blood, working with blood and in blood. And as a result of that, you would identify who is capable to carry out the work and who isn't. It is more than what you see on the television. No one solves a crime so fast. Some crime scenes take hours, sometimes even days," Campbell said.

The St Catherine native said the most tiring part of the job is carrying out excavations, which may take hours. He shared that the removal of soil layers with shovels and brushes can sometimes be taxing on the body.

"It's not like you planting flowers and you just dig. For every bucket of dirt, you have to sieve it out to see if there is any evidence in it, like hair follicles, skin, cigarette butts, and when we sieve out all of that, we secure that as evidence. Then we remove the body, and even after removing, we dig some more just in case, because there might be two bodies and we don't know," he explained. Even with this time-consuming task, Campbell stays committed. He looks forward to analysing the different challenges each crime scene presents.

With the assistance of his plethora of tools, he thinks he is fit for the job as he is dedicated to uncovering the truth and has a passion for the sciences. He said that there is a need for more forensic crime scene investigators, due to the volume of crime reported daily. He advised that an ideal candidate should be able to take initiative, work unsupervised, and must have an analytic mind and keen eye for detail.