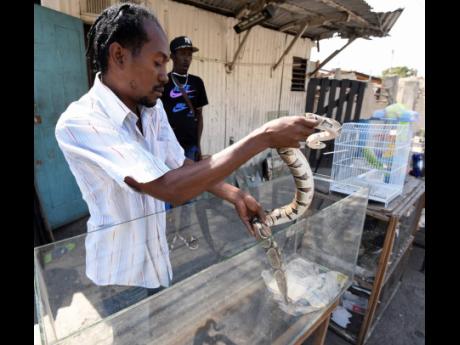 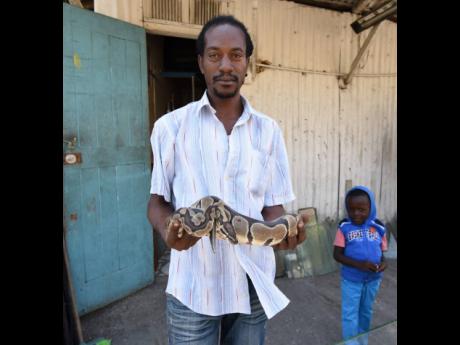 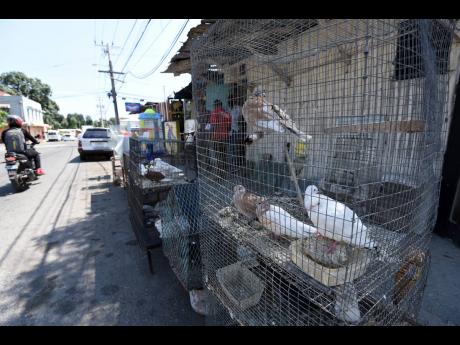 Like other motorists travelling along Lyndhurst Road in Kingston last Friday, the STAR team was intrigued with what appeared to be a plastic snake lying in a showcase on the outside of a pet shop.

Seconds later, the snake move its head, and there the news team discovered that there was nothing artificial about the gold-and-black ball python.

Cracking a smile as this reporter took precaution and maintained her distance, as she peered at the friendly serpent, pet store owner Dwayne Marsh said that the snake has been turning heads over the past month.

"Yuh see how the vehicles slowing down now, is a everyday thing. People always ask mi if she real and if dem can take picture with her. Mi take her out sometimes when the time cool," he said.

Ball pythons are not venomous. They are extremely popular as pets because they tend to be docile.

Marsh said this is not the first snake he has ever had on sale; however, it is the largest. He says the female ball python is about six years old and measures some four and a half feet in length.

Demand is high for snakes

"I have sold about five of them already. There are persons who bring these snakes into the island now and then, but she was bought in a pet shop here by someone I know. The demand is high for snakes, a lot of people want them. I have sold quite a few of them already, about five or so. The more exotic the colour is the more expensive they are. This one is going for a price of $200,000," he said.

He stated that the ball python are very lovable pets and is very sociable and sensible.

"They are not aggressive as some persons may think. They are very friendly. They drink water a lot because they like to be cool, and they eat like once a month. I sell white rats as well, and persons use them as snake food if they are not using them as pet," he said.

"There are persons who say it's the first time they are seeing some of the pets that I sell. Some persons say it's the first they see a snake in real life, and they attract the children a lot. People are just always surprised whenever they pass and see the snakes and the rest of pets," he said.