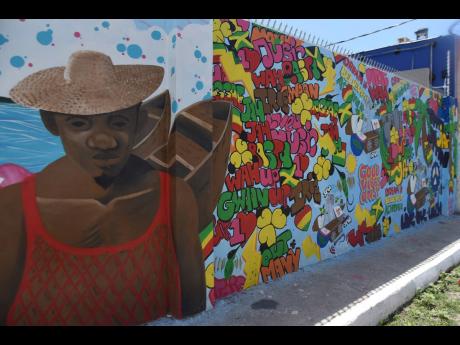 One of the murals adding some colour to communities in Central Kingston. This one is on Water Lane. 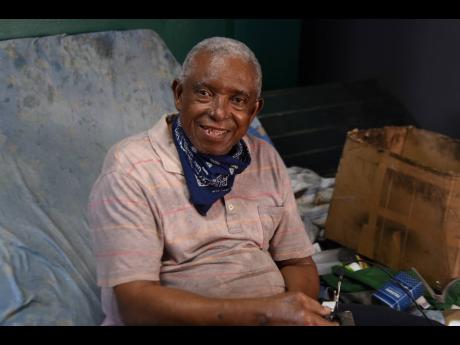 Lascelles Forsythe wants to see improvement to the housing stock to go along with the beautification initiatives. 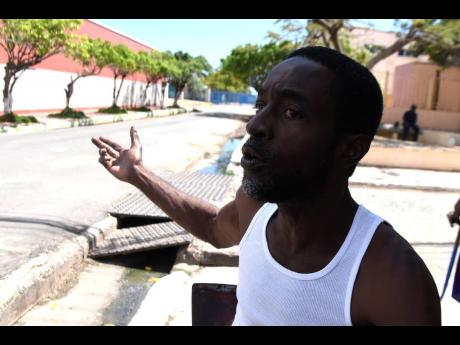 Shawn Robinson says the murals have added beauty to the surroundings.
1
2
3

Driving along the streets of downtown Kingston, one must notice the walls painted in bold and vibrant colours, the artwork depicting rich Jamaican culture and uplifting messages.

These walls of positivity can be found in communities of central Kingston, areas that are often plagued by crime. They were painted last November by the Kingston Creatives.

The residents of Fleet Street, Water Lane and High Holborn Street welcome the transformation. Michael Fuller gives the murals a 'thumbs up'.

"These really beautify the community, make us feel included and we feel nice. Although we densely populated and the place look rugged, this kind of beautify the place and give us a new image," the 23-year-old said. Shawn Robinson said that the eye-catching artwork will help in the reimagining of the community. Robinson, who has been living in Parade Gardens since 1973, said the community needs a drastic transformation.

"We need loads more a them graphics deh and I believe it a go happen, slowly but surely. It is a part of the vision, and if we can't do it, the younger generation can do it," he stressed. The Southside area is riddled with unstable housing structures and zinc fences, and the unfriendly stench of sewage water is ever-present. Robinson said that this is not good for the community that is in the heart of the development plan of the Kingston Waterfront.

A stone's throw away from the Port Royal Street Coastal Revetment Project, where a boardwalk will soon be opened, Robinson explained that with the urgent renovation of homes in Southside, as well as more murals, property values will increase in central Kingston. He pointed the news team to a 100-year-old building that is currently being renovated by the owner, Lascelles Forsythe.

"Sooner or later, when the development complete, down here (Southside) might probably be more valuable than houses in New Kingston. In every city, if you live by the sea, you have to have cash and that will happen soon in Jamaica," Robinson reasoned.

Forsythe said that he has been living in the community for decades. He reminisced about moving to downtown Kingston as a teen when it was a vibrant business district.

The mechanic shop owner said he was once an advocate for the redevelopment of the district, which has now decreased in profitability, having been overrun by crime.

"I have seen downtown change in so many ways. Down here (Southside) was once a limelight district with tailors and a lot of merrymaking. I have been building my house for over 20 years. People say I shouldn't waste my money do that. But I tell them don't worry about it because this is downtown. I think the murals will bring back some vibrancy," Forsythe told THE STAR.

The 74-year-old stressed that while he welcomes additional street paintings, he believes that the community ultimately needs proper housing and employment for unattached youth.

"You see the whole idea of zinc fence where a man can walk through your yard and end up another place, that affi stop. Unless those things happen, the vibrancy won't come back," he said.