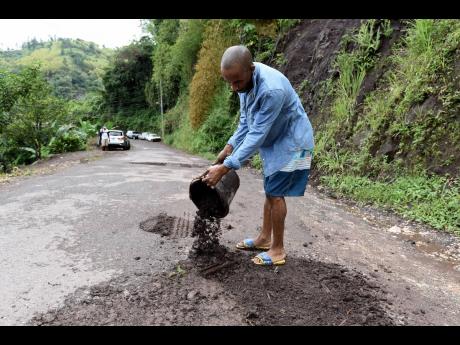 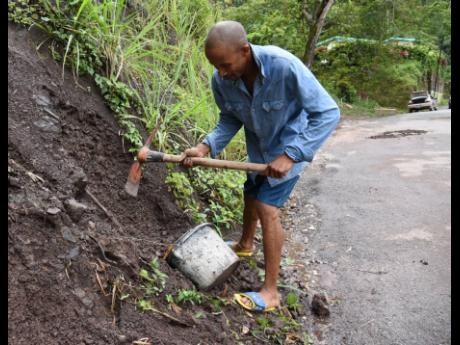 Alley Edwards digs into an embankment for dirt which he uses to fill potholes along the Mount James main road in St Andrew West Rural.
1
2

Alley Edwards, a resident of New Garden in West Rural St Andrew, is a firm believer in self-reliance and for the past two years, he has been using the material from a landslide to fill potholes in and around his community.

On Wednesday, it was different as he was spotted in Mount James taking material from the foot of the landslide and dumping it into the potholes.

"From me see di ting waah do, mi a guh do it because mi can't just sit and cry and wait on the Government to fix it. It may fix one day, but for now mi a gwan fix it. A lot of times mi throw the material in the hole dem and rain fall likkle after and wash it out, but mi nuh make it bother mi because a suh di ting set. Mi just fix it back afterwards. One day the Government a guh fix it, but for now, mi a guh wan do it," Edwards, 38, said.

Like other communities across the island, the roads in Mount James and New Garden were badly scarred during heavy rainfall last November. Edwards, a construction worker, said that the roads, especially in New Garden, were in a deplorable state before last year, and as such, he and other drivers have been forced to shell out thousands of dollars to repair their vehicles.

On Wednesday, as Edwards went back and forth with his shovel and bucket, several motorists who drove on the freshly dumped road saluted the community man as he went about his business.

"No other motorist has ever offered to help because a lot of them believe I am being paid to do this job, but it is nothing like that. My car has been damaged on more than one occasion by this bad road. Right now it lick out mi shocks dem, and mi tired to drive and drop inna pothole, so mi a do it," he said.

For Edwards, taking his time to patch the potholes in his community represents a practical approach to problem-solving.

"If all of us take the time out to just help fix a fault in the space weh we live, our community would be better. Jamaica would look better. We can't just sit and wait on help that may never come at the time when we really need it. I will continue to do this, rain or shine. It is costing me nothing, really," he concluded.