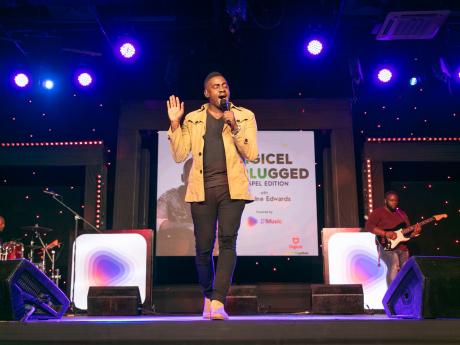 Telecommunications giants Digicel promised to execute a praise-filled online concert on Good Friday, and by all counts, it delivered just that.

A restriction on large physical gatherings and a lockdown for the second consecutive weekend meant Churchgoers could not carry out the usual Easter worship at their respective sanctuaries. But with a star-studded line-up, the gospel edition of the Digicel Unplugged series ensured that viewers could get their praise on from the comfort of their homes. As Jamaicans reflected on the reason for the season, the Gospel concert provided exactly what viewers needed on Good Friday — a heavy dose of worship that would lift their spirits.

Sherlon Russell, the 2019 winner of Digicel Rising Stars, was the evening's opening act, and with a voice that gives listeners goosebumps, he set the stage for the moving performances that were yet to come. Through song, Russell testified of the trials he has been through and expressed gratitude for the promise God made to be with him through it all.

"You are the God of the hills and valleys; I am not alone. I've watched my dreams get broken, in you, I hope again," he sang, giving God thanks for his never-ending mercy.

Rhoda Isabella took over the microphone next and delivered a soul-stirring set. She no doubt reminded viewers of the sacrifice Jesus Christ made by dying on the cross for the sins of man. Through the track, You Have Won the Victory, she shared that Christ conquered death and "won the victory" through his resurrection.

Her voice packed some powerful punches as she delivered a medley of good-ole Church songs that no doubt had viewers rocking to and fro from their living rooms. She indeed took the worship experience to new heights.

Urging Jamaicans to speak blessings over their lives, Jermaine Edwards was next on the Digicel Unplugged stage. Opening with the track, I'm Blessed, Edwards encouraged viewers to declare blessings over their lives, even if they don't feel like it. During his 40-minute set, Edwards performed songs such as No Weapon, Make A Way and My Champion as he urged Jamaicans to push through the adversities they face resting on the assurance that Christ will not forsake his people.

Rondell Positive was the evening's closing act. Declaring from the start that he was there to deliver a message, the singer served up tracks, including Most High, Mirror (We Are The Change) and Purpose Calling. Stating that he was there to "leggo di people dem and deliver dem inna dem purpose and make sure everybody a walk and understand why the King came and gave himself", Rondell Positive urged Jamaicans to start walking in their purpose.

In a post-show interview with THE STAR, Reshima Kelly-Williams, brand marketing manager at Digicel, said although the company is still tallying streaming numbers from Good Friday's event, the concert looks to be the most successful virtual Gospel event they've held so far.

She shared that, based on feedback, the show provided just what customers needed over the Holy weekend.

"This was a truly uplifting experience for our customers, friends and everyone who tuned in from all corners of the Earth. The overall feedback has been overwhelmingly positive, with viewers left clamouring for more. Some persons commented during the live stream that this soul-stirring virtual gospel concert was a welcomed relief to all that's been happening lately," she said.

She added, "The overall verdict is that the Digicel Unplugged virtual gospel concert was the best thing to have happened during lockdown."