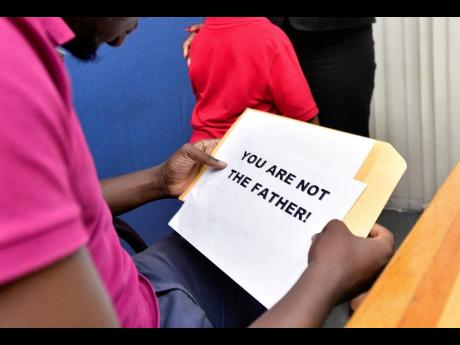 A security guard recently found out that he was not the father for three of his four children.

John Brown* is a broken man. He says that he is close to falling into depression. He has long confirmed that his girlfriend of almost 18 years has been unfaithful to him on many occasions, but he never expected to find out, through paternity tests, that only one of their four children belongs to him.

Brown, a security guard, was besides himself last Wednesday as he detailed a relationship of misdeeds, forgiveness and perpetual hurt that led to him deciding he would find out whether his blood runs through the veins of the children who call him daddy.

"Mi feel like mi a guh crazy because I am the only father those children know. Mi did feel shocked when mi find out, mi nah lie," Brown said.

In 2019, this newspaper reported that Polygenics Consulting, a company that offers DNA testing in Jamaica, found that in 70 per cent of their tests, the men who were named as fathers had nothing to do with the paternity of the children.

Brown is among those that make up this frightening statistics. He was 18 when Sasha, 17 at the time, told him that they were going to be parents. Brown said that he was beyond excited that he decided to work three jobs to ensure that he could support his young family.

"The day the baby born, I was so happy. She called and asked for my correct name and I told her, and she said she was going to register our baby. Months after she had the baby, she got really sick and she eventually ended up in the hospital," Brown recounted.

"We had forgotten a medical card that was needed at the hospital and she had to ask my mom to go in her bag to look for it. That was when my mom found our daughter's immunization card and saw that the baby had a different surname from mine," he said.

Unknown to Brown, he was supporting and bonding with a child he thought was his, but the baby did not have his name. He said that when he confronted Sash about it, she told him that her ex-boyfriend had forced her into giving the child his surname, but that the baby belonged to him. He said he quickly forgive her as she was extremely sick, and he loved the baby dearly. That child is now 17 years old.

Three years later, Sasha got pregnant again and during that time, Brown said, there were allegations swirling throughout the community that his girlfriend was being unfaithful. He recall catching her red-handed, but decided to forgive her.

"Mi come home early and the door locked. She open the door and she say she a beg mi go back a road go buy a pill fi her because she feel sick. Mi say mi a guh change mi uniform, and when mi open di closet and when mi look, is a man bend down with a knife, and him stab off a mi and run out," Brown said.

"I thought about leaving but I loved her with all my heart, so I would just forgive her everytime she goes out and cheat. Sometimes I would leave, but as soon as I find out that she not there, it is like I am going crazy. She always cry, and mi just always take her back," he added.

Then, 0n one occasion when the couple was on a break, Sasha informed Brown that she was pregnant with their third child. He said that he had major doubts about him being the father because he was aware that she was involved with at least two other persons.

"I didn't support her during the pregnancy, but when she was about nine months pregnant, she told me she needed stuff and that she was certain that I was the father, so I took her and buy the clothes and whatever else that was needed," Brown related.

Months later, he was in for a massive shocker. He had taken the baby for a check-up at a health centre, unaware that the child did not have his name.

"I was in the clinic waiting for my baby name to be called and I hear the nurse came out and was calling a name, but because it wasn't my last name I didn't move. A guy then come up to me and told me that it was my turn, and he know the baby because he and the mother always turn up for clinic visits. I was so ashamed. When I look at the baby passport, I realised it was a different name," Brown said.

The 35-year-old, broken-hearted Brown said that he confronted Sasha, who, in tears, told him that she was seeing another man around the time she got pregnant, and he had threatened her to put the baby in his name. She told him that the man's surname was only on the medical passport and not the birth certificate.

As it turns out, based on DNA results, that child is the only one that was fathered by Brown.

"I am hurting, and I am leaving the relationship because I am not going to stay. I am over her," he said.